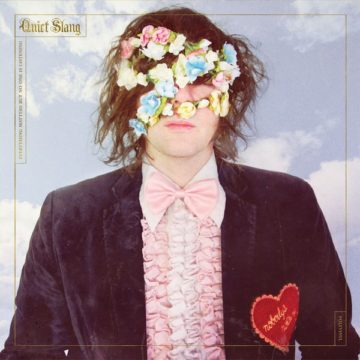 Quiet Slang
Everything Matters But No One Is Listening
Polyvinyl Records

First off, go listen to Beach Slang, then go listen to Quiet Slang. There seems to be difference between the two, but also a strange similarity. Well, Quiet Slang is James Alex, the frontman for Beach Slang. Beach Slang is known as a pretty powerful punk rock quartet. Quiet Slang does the opposite of the fuzzy guitar, James throws his unique voice on top of pianos and cellos. It’s a much quieter styling (hints the pun with the name!).

The beauty of Quiet Slang’s debut is that is so dramatically different from the well-known Beach Slang music, but it is still great. James Alex claims “Rock ‘n’ roll is sort of my consolation prize for wanting to have been a writer.” This album allows Alex to pull back on the yelling and bring a different, but still unique and powerful energy. Quiet Slang’s use of calmer instruments brings a totally different feel from the guitar laden music we expect and adds a layer of the creativity and writing ability of James Alex.

The album is so unique and different than what Beach Slang brings that I highly recommend giving it a listen. I can see this getting some serious play in my album routine. It’s a great, chill break from what we’re used to, but it does not at all lack the power of a typical Beach Slang album.

The Spill Magazine is a Toronto-based online publication dedicated to covering the independent music scene with a strong focus on our thriving hometown talent. Our writers bring you up-to-date news, in-depth features on musicians and reviews for the latest CD releases. We also travel to the front lines for all local festivals including Canadian Music Week and North by Northeast.Don’t forget to check out our Facebook and Twitter pages for all daily Spill updates.
RELATED ARTICLES
album reviewalbum reviewsbeach slang
9.0