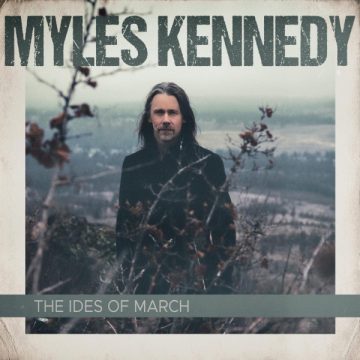 Following his acoustic driven and artistically stunning 2018 solo debut, Year Of The Tiger, Myles Kennedy has returned with his solo sophomore follow-up. In the three years since, Kennedy has delivered an album with Slash and Alter Bridge – along with an additional EP from the band – but The Ides Of March sees Kennedy return with what is yet another gem among his expansive catalogue.

With Year Of The Tiger in mind, The Ides Of March is an immediate departure from the folky, singer-songwriter tone of his solo debut. This much is certain from the bluesy, wailing guitars in the opening of the lead single, “Get Along”. While the verse is laden with lush acoustic guitars and vocal harmonies, “Get Along” feels equally that of the ‘70s as it does of rock from the last decade. This can also be said about the following tracks, “A Thousand Words” – a country-tinged track accented by ripping lead lines and a shredding solo – and the southern blues twang of “In Stride” – a definite highlight on the record.

The album continues with the title track, a truly stunning song that effortlessly shifts in mood and instrumental tone over the course of seven and a half minutes, all the while leaving you on the edge of your seat as to where Kennedy will go next. “The Ides Of March” has all the makings of a Bond theme and demonstrates an unparalleled level of sophistication and taste in songwriting and performance. It is one thing to fill a lengthy track with massive solos and high energy riffs, however it is an entirely different feat to do so with a slow burner that soars over peaks and valleys with a cinematic vibe. “The Ides Of March” is a beast of a composition and Kennedy is simply incredible. Kennedy continues to deliver nothing but greatness, especially on tracks like the power ballad accented with a southern flair, “Moonshot”, the Rolling Stones inspired “Wake Me When It’s Over”, and the atmospheric closing blues ballad, “Worried Mind”.

Over the course of 11 tracks, Kennedy refuses to be boxed in by conventional musical styles, or your own expectations of him based on his previous work. Instead, The Ides Of March stands as a testament to the creativity of Kennedy and his artistry as a prolific songwriter. Furthermore, the album, front to back, is a masterclass in vocal performance and reaffirms Kennedy as not only one of the greatest singers of the past two decades, but also one of the strongest guitar players rock has to offer. The Ides Of March is much more than Kennedy the rockstar; but rather it is Kennedy the curator, the creative, and the artist.

A passion for music has always been a part of Gerrod’s life. As a young boy, he was raised on a steady diet of the music from The Chili Peppers, Aerosmith, The Stones, Prince, and others from his mum. Raised in the GTA, Gerrod continued to foster his love for music by attending a wide range of concerts and learning the drums. His unapologetic passion for music has no bounds and has spread to a wide variety of styles, whether it be the 90’s rock that sound tracked his teenage years, the jazz he studied in university, or his newfound love for hip-hop. He recently received his bachelors in music and education from York University and is passionate about writing and reviewing good (and less than good) music. Gerrod is also the drummer and songwriter for a Toronto based rock & roll band, One In The Chamber.
RELATED ARTICLES
album reviewalbum reviewsguns n' roses
10