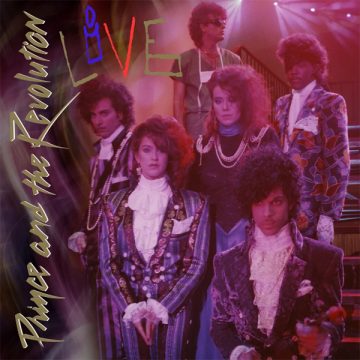 The latest offering from the Prince estate and his long mythologized vault comes in the form of Prince And The Revolution: Live. The surprise release, recorded on March 30, 1985 at the Carrier Dome in Syracuse, New York as a part of the Purple Rain tour, marks the first official release of this widely-bootlegged concert and paired with a concert film from the same night, which recently streamed on YouTube in an effort to raise funds for the World Health Organization’s COVID-19 Solidarity Response Fund. Concert film and live record alike, Prince And The Revolution: Live is a truly spectacular documentation of one of the greatest artists in history at his first major creative, and his definitive commercial, peak.

“Hello Syracuse and the world. My name is Prince and I’ve come to play with you” a distant voice declares before the familiar “Dearly beloved” kicks off the first song, “Let’s Go Crazy”. Prince And The Revolution are in truly fine form as they blast through a thrilling opening track. Naturally, the album includes a number of soon-to-be hits, including “Purple Rain”, “When Doves Cry”, “I Would Die 4 U”, in fact, Purple Rain in its entirety is performed. It also includes a number of favorites from his previous records, such as “1999”, “Little Red Corvette”, and “Let’s Pretend We’re Married”, among others. Naturally, each of these songs are performed with an equal combination of sophisticated taste as they are with a level of pop flair.

Hits aside, it is the B-sides and deep cuts that are performed at a level that equals, and even in some cases, surpasses that of the obvious fan favourites. “Darling Nikki” is striking, while “Irresistible Bitch” is an absolute funk jam; however, a definite highlight is a truly stunning performance of “The Beautiful Ones”. Regardless, Prince remains a powerful figure of pure artistry. His vocal balance between smooth melodies and throat-wrenching screams is something to truly behold and it is amazing that after this tour, he would remain an underrated guitarist with all the lead lines and solos he would shred in such a manner that remains unique to just him.

Having heard and seen snippets of the Purple Rain tour, and having read a number of accounts of it, Prince And The Revolution: Live seemingly does the impossible: it makes decades of praise and amazement feel small compared to how truly incredible it is. This is a live album that truly surpasses all expectations and whether you were there to witness it or not, Prince And The Revolution: Live is an absolutely must-hear spectacle; a flawless documentation that perfectly encapsulates Prince’s creative essence of the time, and ultimately solidifies his and The Revolution’s greater importance to popular music and culture, beyond the studio, 35 years later.

A passion for music has always been a part of Gerrod’s life. As a young boy, he was raised on a steady diet of the music from The Chili Peppers, Aerosmith, The Stones, Prince, and others from his mum. Raised in the GTA, Gerrod continued to foster his love for music by attending a wide range of concerts and learning the drums. His unapologetic passion for music has no bounds and has spread to a wide variety of styles, whether it be the 90’s rock that sound tracked his teenage years, the jazz he studied in university, or his newfound love for hip-hop. He recently received his bachelors in music and education from York University and is passionate about writing and reviewing good (and less than good) music. Gerrod is also the drummer and songwriter for a Toronto based rock & roll band, One In The Chamber.
RELATED ARTICLES
album reviewalbum reviewsprince
9.0