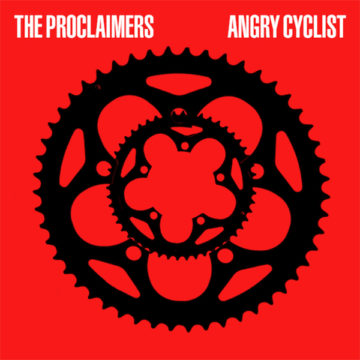 Angry Cyclist is the first collection of new music from The Proclaimers since 2015, and it is a sonic treat. Leave it to twins Charlie and Craig Reid to give us the old sneak attack – as if we didn’t see it coming! Hidden behind those honest Scots accents, infectious melodies and spot-on vocal harmonies, is a well of emotion and a strong sense of political and social justice. This is no surprise, really, as strong, catchy songs with a conscience have been The Proclaimers’ stock-in-trade since their debut album, 1989’s This Is The Story.

Because their sound is so familiar – even iconic – one might be tempted to discount this album at first listen. It could be easy to take The Proclaimers for granted, but they still have plenty to say, and their songs are infectious as hell. This is a recording that grows on the listener with each successive spin.

Nowhere is this more evident than in the album’s title track, “Angry Cyclist”, where one is initially struck by the plaintive tone, and the unusual lyric. The musical theme sounds simple, initially, but the power of the anti-fascist lyrics is driven home by the rhythm section, and stabs of staccato guitar.

Another standout track is “Streets of Edinburgh”, a sweet ballad with a sentimental look backwards and forwards, at the city where the brothers spent their formative years. This song is the stuff of movie themes and musical theatre, with a melody that absolutely soars. It is at once gritty and emotive, without being cloying. The joy and depth of feeling that leaps from the throats of the brothers Reid cannot be denied.

There are many moments to enjoy in this recording, with energy and emotion a-plenty. With so many pluses, The Proclaimers can be forgiven for the odd cliché melody line, goofy rhyme or production choice. Things which may sound trite coming from any other artist, magically work in the hands of this duo. Overall, it’s quite a feat to sound this fresh and relevant after thirty years in the business, but The Proclaimers have done just that. Enjoy!

Musician, writer, and grandad Bryan Williston is a fan of music in all of its forms. He loves to listen to, play, and talk about music, and to share his ideas with others. Despite the failings of humans, he is hopeful about the future, and thinks that Spill Magazine readers are just the best. Bryan lives in Whitby with an assortment of people and dogs.
RELATED ARTICLES
album reviewalbum reviewssony music
8.0