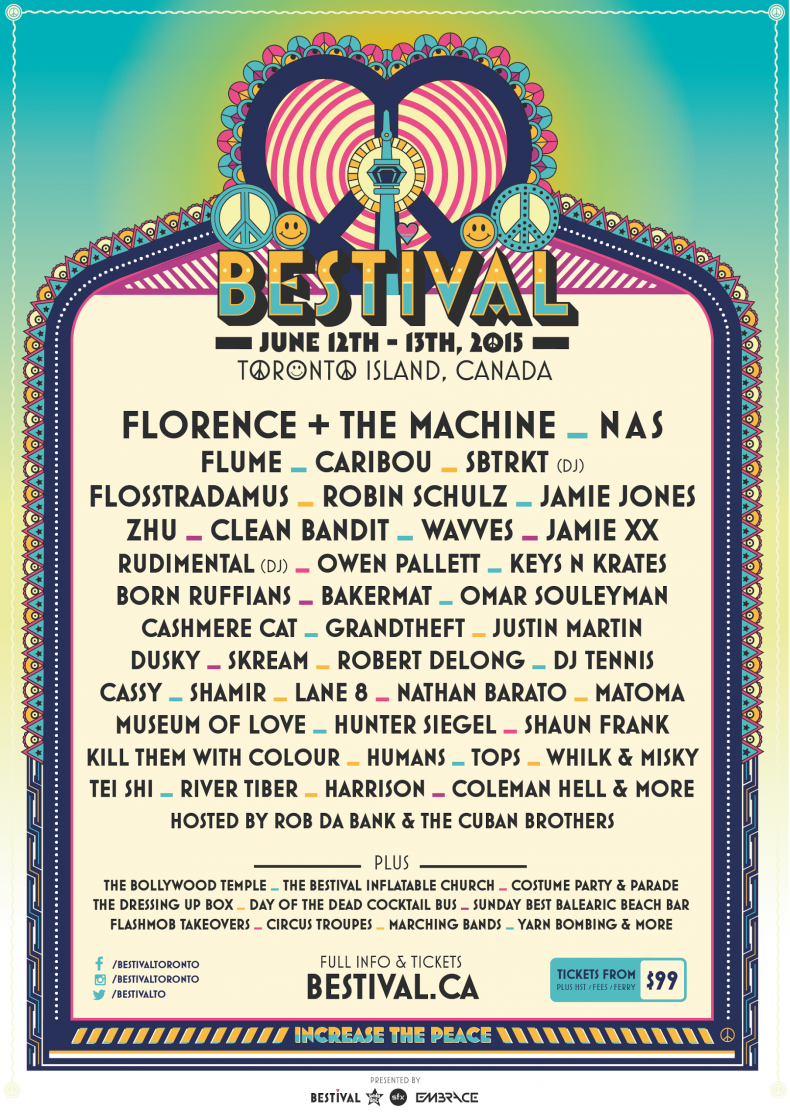 On June 12 and 13th, one of the UK’s largest music fests will be heading to Canada for the first time ever. Bestival will be taking over Toronto Islands’ Hanlan Point, for two days of music and merriment unlike any other festival the city has seen. The festival will be the largest held on Toronto Islands since 2009’s Virgin Fest. So if you’re worried about going into live music withdrawal between Arts and Crafts Field Trip and NXNE, you can relax.

Bestival is the brainchild of Rob (Sunday Best) and Josie Da Bank, and their partners John and Ziggy (The Cuban Brothers), who have been running the festival in the UK for over ten years. Alongside an exclusive list of big name and eclectic music acts, the festival also boasts everything from costume parties to beach clubs, all with the flavour of a Renaissance fair and a 70s hippie love fest. A temporary stage will be built holding 20,000 spectators, and additional ferries will be running to and from the island.

In addition to live music, the festival also boasts such mysterious events as a Day Of The Dead Cocktail Bus, Day Of The Dead Body Painting, Meow Mur The Cosmic Cat, The Bestival Inflatable Church, a Knitting Tent and Yarn Bombing, a Costume Party and Parade, and Marching Bands.

Gates will open daily at 12 pm, and events run until 11 pm. It is an all ages event. For more information visit http://www.bestival.ca/info.

Trish Melanson lives in the Toronto area with her three boys, Nicholas, Justin, and Eric, her dog Jakkson, and her cats Max and Jagger. She is the former host and producer of Canadian Kickass, a weekly two hour radio show on New Jersey's Chestnut Radio, showcasing Canadian Music. She is also a former Web Content Manager of Indie Soundscapes, an online showcase for Independent Music Artists Worldwide, and was a regular music contributor to The Stroumboulopouli. She is a fervent supporter of the Toronto live music scene. In a past life she was a teacher and Vice Principal in Durham Region. She has many more new and exciting projects waiting in the wings. ;)
RELATED ARTICLES
bestivalfeatures