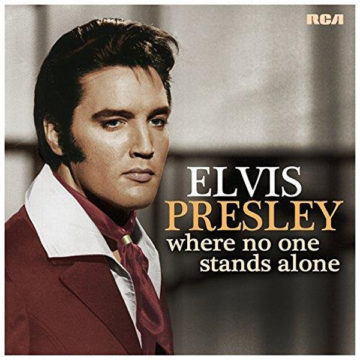 Elvis Presley
Where No One Stands Alone
RCA/Sony Music

Elvis always seemed at home singing gospel, and there are many interviews with Elvis where he references growing up singing hymns and religious music. He released some brilliant gospel albums (How Great Thou Art, Promised Land) and his classic Christmas albums. Since Elvis’s  death there have been reissues, greatest hits packages, live albums, and a Cirque Du Soleil show and album (Viva Elvis!). Following those reissues, RCA released a  number of albums featuring current artists dueting with Elvis. Finally,  The Philharmonic Orchestra got into the action with their arrangements overdubbed on old Elvis recordings. Now RCA and the Presley estate brings another album for that catalogue.

Where No One Stands Alone is a collection of some of Elvis’s popular and relatively unknown inspirational music. Elvis’s religious recordings are stunning and brilliant, in their original form. Here we have a collection of his songs augmented by new vocals, musical arrangements and even a duet. But why? The original recordings hold up and really did not need any form of augmentation.

Adding new musical arrangements to recordings by artists who have passed away is nothing new. MGM did it with Hank Williams in the 1950s and it carried on through the decades. Sometimes it works (Patsy Cline’s recordings come to mind) , but for the most part it has the listener reaching for the original versions. Usually it is better to add to previously unreleased material so there are no comparisons.

Sure,  many of the artists featured on this album have a history with Elvis (Darlene Love sang with Elvis on his 1968 television special for example) but that does not mean it works in 2018. Really they tried to make the songs more contemporary, but again this does not make sense when you are tapping on artists from the 1960s and 1970s (including Cissy Houston and members of the Imperials).

Even more distracting is his ‘duet’ with his daughter, Lisa Marie on the title track. Do you remember when Natalie Cole dueted with an old track of her dad’s Nat King Cole (“Unforgettable”, 1991)? That was not a great idea then, nor is it a good idea now. Lisa Marie Presley is a true talent and has released several great albums. She has a great voice, but dueting with her father on this particular track does not do much for Elvis or her. Elvis’s original version of this song, from 1967,  is stripped down and extremely heartfelt. It is a stunning vocal performance. Here, it gets weighed down by the extra production and Lisa Marie’s vocals.

I love Elvis, and think he is one of the originators, but the mining of his catalogue should come to an end now. Unreleased material and concerts are fine and historical and are always welcomed. But taking brilliantly produced music, rearranging the songs, and taking the power away from them is a shame. The songs on Where No One Stands Alone are brilliant in their original form, and I would encourage listeners to check out those versions. Elvis fans may want this for their collection, but they might have the same questions. Why is this album necessary? In these times, his inspirational music is needed, just not in this form.

Born and raised in Whitby, Aaron discovered music through his love of The Beatles. This led to a career in radio, writing for various publications, and ultimately a radio show about The Beatles (Beatles Universe), which ran for over four years. When not immersed in music, Aaron enjoys spending time with the loves of his life -- his wife Andrea, and daughters Emily and Linda (all of whom have an intense love of music too).
RELATED ARTICLES
album reviewalbum reviewselvis presley
7.0