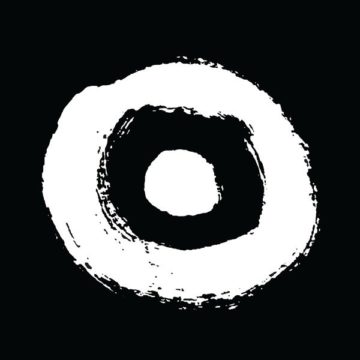 Poptone is one half of Bauhaus or two thirds of Tones on Tail and Love and Rockets, you can decide your reference point. The truth is Poptone is a new band featuring Daniel Ash and Kevin Haskins (both from the aforementioned bands), and Haskins’ daughter, Diva Dompé. The self-titled Poptone is their debut album.

The album is a live recording,  recorded live in studio for radio station KXLU in Los Angeles. It is comprised of songs Poptone performed on their first (and current) tour. It is a great recording, well produced and mixed. The instrumentation is top notch. Ash’s guitar work literally explodes throughout, while Haskins has not lost any of his power as the drummer. Dompé’s bass and backing vocals fit in perfectly with the music and this band. The trademark guitar and drum sounds from those classic recordings come through loud and clear.

The songs are primarily Tones On Tails material, with some Love and Rockets and Bauhaus thrown in for good measure. The songs sound as good today as they did three decades ago. And the band reproduce the songs very faithfully. Perhaps that is the main problem with Poptone. The versions do not stray to far from the originals, which makes this kind of a ‘best of’ collection played live.

To their credit, this band can reproduce the original versions, but as I am listening, I keep thinking I want to hear this band reinvent some of the songs, or better yet, write some new ones. The cover of “Heartbreak Hotel” is brilliant and a great way to open the album. Again, as good as this album is, it is this cover that is the highlight. They could have covered other songs as well. Remember Bauhaus’s cover of “Ziggy Stardust”? This band has the ability to interpret songs, so more of that would have been welcomed!

This is a fine document of a tour and a great live album. It also serves well as a debut album. One can only hope that Poptone begins writing some new songs and developing this band into a viable new band. There is always a problem with live albums. This band, seen live, is astounding. The energy, and sheer love of playing emits from the band as they play. This is not captured on record.

Poptone serves as a wonderful introduction to the band and as a reminder of the brilliance of Tones on Tail, Love and Rockets and, of course, Bauhaus. As good as it is, and it is a good album, this band is short changing itself. They would be capable of writing and recording new material that will stand up to the classic bands from which two third Poptone got their start.

Born and raised in Whitby, Aaron discovered music through his love of The Beatles. This led to a career in radio, writing for various publications, and ultimately a radio show about The Beatles (Beatles Universe), which ran for over four years. When not immersed in music, Aaron enjoys spending time with the loves of his life -- his wife Andrea, and daughters Emily and Linda (all of whom have an intense love of music too).
RELATED ARTICLES
album reviewalbum reviewsbauhaus
8.0