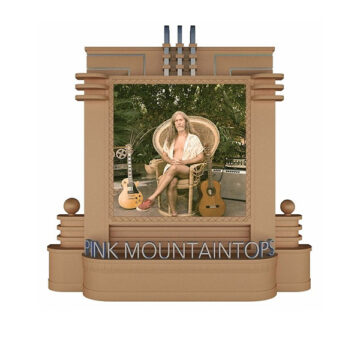 Peacock Pools, the first release in eight years from the Vancouver-born experimental, folky, psychedelic rockers Pink Mountaintops may be a difficult album to digest for some fans while leaving newer listeners scratching their heads. Not that this is a bad album by any means, however the pace at which these songs jump from style and execution can feel a bit jarring. That said, there are many highs and moments of musical brilliance that make the apparent lack of cohesion more of an afterthought than a fault. Conceived and recorded in early 2020 while frontman Stephen McBean was holed up in his Los Angeles residence, Peacock Pools plays out like a psychedelic glam rock cabin fever dream.

Opening with the excellent cover of Black Flag’s “Nervous Breakdown”, the track is given a bit of a glammed up bluesy punch, defanging the raw angst of the original and is a hell of a kick off to Peacock Pools.

“Lights of the City” is a dirty guitar heavy banger that screams of early 90’s big hair power rock, complete with washes of warm trippy synth and McBean’s wall of excellent guitar work. “All This Death Is Killing Me” is a ridiculous short blast of over the top metal that reminds me of something Ween may have done, while “Nikki Go Sudden” pays homage Swell Maps co-founder Nikki Sudden who passed away in 2006.

With some pretty cool contributions from Redd Kross’ Steven McDonald and Melvins drummer Dale Crover whose signature skin hit is impossible to miss, Peacock Pools is full of strong tunes and is a fun return for the band, however as stated it does suffer from not having a strong glue holding it together, feeling more like a collection of random solid songs and less of the musical journey that previous albums have been.

It took the recommendation of a best friend to get me into the pages of music magazine writing. Armed with the deepest appreciation for all the music, a ridiculous sense of humour, and the apparent ability to string a few words together, these fingers started giving. Who knew it would become one of my favourite things many years later and that I'd enjoy seeing my works published the world over?!
RELATED ARTICLES
album reviewalbum reviewspeacock pools
9.0