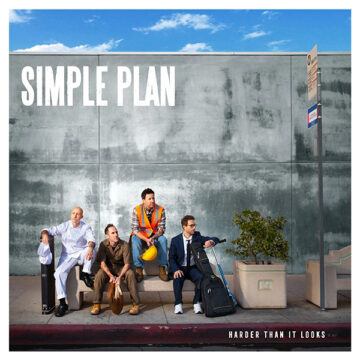 Simple Plan has always reigned supreme when we look to the kings that rule the pop-punk realm. They not only shaped the genre, but emerging bands have also used them as the pillar of influence on which the genre was built. While the band has taken an extended absence over the past six years since their last release, their new album, Harder Than It Looks, burns bright with nostalgic resonance and emotional lyricism. Without a large record label backing them this time around, Simple Plan proves they still have the high ground in the genre arena, conquering this and more with Harder Than It Looks. Long-time songwriting partners and friends, We The Kings’ Travis Clark and producers Brian Howes and Jason Van Poederooyen (Get Your Heart On! 2011) and Zakk Cervini (Blink-182, Good Charlotte) were even a part of the recording process. Vocalist Pierre Bouvier even receives producer credit for the first time, something well-earned after years of meticulously crafting the band’s demos.

Opening with their single, “Wake Me Up (When This Nightmare Is Over), impassioned heaviness surfaces. While the single was not intended to hit the emotional landmarks of COVID-19 and the present crisis in Ukraine, it beautifully brings to light the struggles we endure and is a brilliant lyrical page-turner for what follows for the rest of the record.

The energy continues with the band’s most sound conscious efforts, “Ruin My Life.” Featuring Deryck Whibley of Sum 41, this track takes us back to the golden days of pop-punk yet keeps in stride with the sentimental weight of the previous listening experience. “The Antidote” continues to carry the band’s emotive fire until we switch gears to more euphoric and upbeat pleasures on the album, “Million Pictures Of You,” that segue into more unique vocal treasures on the album “Anxiety” and one of the best presentations on the album, “Congratulations.”

Some of the most well-done trips back in memory lane on the record thus far are “Congratulations” and “Best Day Of My Life.” White-hot, fast-paced pop-punk numbers that many will return to and adore, Simple Plan has never sounded better than they do at this moment. Perhaps it may be because of the freedom and lack of constraints tied to this album release, but the enjoyment and sense of no boundaries within their creative drive are felt within every experience. Sometimes letting go and taking the time to come back to who you are is what is needed to create your magnum opus musically.

Creating a pop-punk work of art they have done as the album ends with a gorgeous finisher, “Two.” Emotionally engaging and showing the band has come a long way from their debut back in 2004, Simple Plan has matured, dazzled, and awed us with this release. Coming back after six years can be anxiety-ridden when you are one of the top-tier acts in the pop-punk industry, but with Harder Than It Looks, all their hard work made this look like a walk in the park. No one is going to care more about the band than your band, and indeed they showed that dedication and more with this latest release.