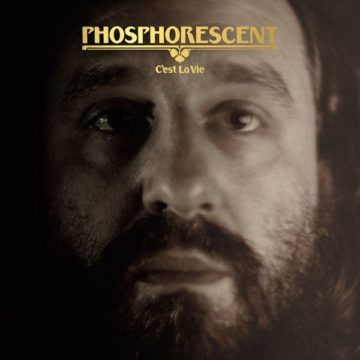 Phosphorescent is really one person, Matthew Houck. Originally from Alabama, now based out of Nashville by way of Brooklyn. He has been performing and recording under the name Phosphorescent since 2001, with his first album, A Hundred Times Or More, being released in 2003. C’est La Vie is his ninth release under this name, and it is his strongest album yet.

A lot has changed for Houck since his last studio album, Muchacho (he did release the brilliant live album Live At The Music Hall in 2015). During the last five year, he relocated from Brooklyn to Nashville, he fell in love, became a father and built his own studio in Nashville. As a result, C’est la Vie is a pretty ‘up’ album for Houck. Much like Lennon’s writing on Double Fantasy, Houck reflects and is able to appreciate being a dad (“My Beautiful Boy”) and being in a stable relationship. “She made a sound like fire,” Houck sings in “There From Here”, “that I had waited all my life for this.” Beautiful words, sentiment and melody.

But it is not an easy ride. He takes us through his struggles and yet keeps coming back to the same conclusion, love will make everything right. It may not take away the struggle, but it does make enduring the struggle a little easier. Listen to “These Rocks”. Houck sings, “These rocks, they are heavy. Guess I wouldn’t want it any other way.”

C’est la Vie is an astounding work. Houck wrote and produced the entire album and mixed by Matthew and Vance Powell (Jack White, Chris Stapleton, Arctic Monkeys), he strikes the perfect balance of alt-rock, Americana and singer-songwriter style music. This is no easy task, yet he succeeds at every step. He also, very cleverly, bookends the album with two instrumentals, “Black Moon/Silver Waves”.  They serve as the intro and outro to a very complete and cohesive work.

C’est la Vie is a strong album, and an album that demands and deserves to be listened to in one complete sitting. It is not a collection of singles, but a concept album about one man’s journey through life. Although he does not have any answers, nor does he pretend to, he does offer his story. It is a personal and strong album.  C’est la Vie is brilliant work and an artist who has matured into a confident artist.

Born and raised in Whitby, Aaron discovered music through his love of The Beatles. This led to a career in radio, writing for various publications, and ultimately a radio show about The Beatles (Beatles Universe), which ran for over four years. When not immersed in music, Aaron enjoys spending time with the loves of his life -- his wife Andrea, and daughters Emily and Linda (all of whom have an intense love of music too).
RELATED ARTICLES
album reviewalbum reviewsdead oceans
9.0