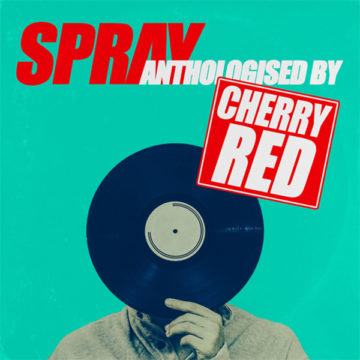 Spray is a synth-based duo from the U.K., made up of siblings Ricardo Autobahn and Jenny McLaren. Both were originally in the band Cuban Boys (of “Hampsterdance” fame, which was actually a song called  “Cognoscenti Vs. Intelligentsia”). Following their collapse, they formed Spray. Autobahn and McLaren released their debut album in 2002 (Living In Neon).  The duo have released three albums in total and a number of singles. They have returned, in fine form, in 2018 with the tongue in cheek EP Anthologised by Cherry Red.

Cherry Red is one of the forerunners in reissues and repackages. They are also one of the most respected labels and do extremely brilliant work with their anthologies and reissues. And this EP is certainly not a put down of that label. Spray seems to be having fun with those who peaked and cannot quite figure out their career move.

McLaren sings in the title track. They even manage to get a dig in at Record Store Day in the song.

The title track, “Anthologised by Cherry Red” is a playful song done, very much, in the style of the 1980s. It hints at Kim Wilde’s  “Kids In America”, but it is so perfect in parodying the 1980s that it just sounds familiar. And in typical ’80s fashion, there are four remixes of the song, the best, by far, is the final ‘Extended Mix’.

The other songs on the EP include a remix of an older tune, “We’re All Stars 2018” and a remix from their forthcoming album, “We Gotta Get Haircuts”. Both have the ‘80s vibe flowing through them and they are great songs. Melodic, amusing and well played. The final two tracks, “Limousine” and “A Heartbreak Ago” are brand new songs and fit nicely in the package.

The duo produced the EP and it sounds great. The songs are smart, quirky and downright memorable. The synth is put to good use throughout. All of the songs on Anthologised by Cherry Red are melodic and sound great.   I look forward to the album.

Born and raised in Whitby, Aaron discovered music through his love of The Beatles. This led to a career in radio, writing for various publications, and ultimately a radio show about The Beatles (Beatles Universe), which ran for over four years. When not immersed in music, Aaron enjoys spending time with the loves of his life -- his wife Andrea, and daughters Emily and Linda (all of whom have an intense love of music too).
RELATED ARTICLES
album reviewscherry red records
10