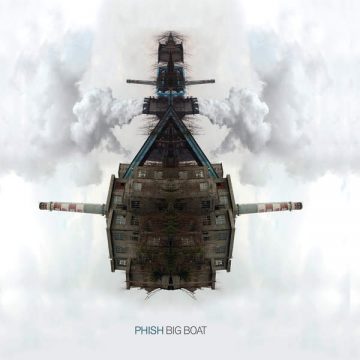 For many, the term “Jam Band” is intimidating. It conjures up images of four-hour concerts, 15-minute guitar solos and songs overstuffed with every conceivable instrument. Thanks to that mentality Phish, perennial leaders of the Jam Band experimental genre, have always come off has a love-or-hate kind of group. Rarely will one admit more than a passing interest in the band.

The group’s 13th studio album Big Boat is a perfect introduction for those who may have been too intimated to listen to some of Phish’s earlier work. Overall it’s an easy listening and accessible album that casual fans should find a lot to like about. For the most part the song structure, while complicated, sounds fairly mundane. The opening track “Friends” sounds like it could find a home on Standard Rock radio.

There’s plenty of humour to be found sprinkled throughout Big Boat.  “Blaze On,” clocking in at exactly four minutes and 20 seconds, is an ode to celebrating the start of good times the only way Phish knows how. It’s sure to live on in infamy in smoky college dorm rooms for years to come.
The second half of the album is where the group’s longer jam tendencies start to take over. Fans of the group will no doubt be thrilled with the funky groove Phish gets lost in on “No Men In No Man’s Land” or the 13-minute closing opus “Petrichor.” Those who are just discovering the band, however, may find themselves bored and starting to tune out.

It’s hard to properly judge a Phish album, since the very idea of recording a set of structured songs seem to go against what has made Phish so popular for more than 30 years.  This is a band that thrives in a live environment. Every song takes on a new life every night, and no two concerts are the same.  Big Boat is a great introduction for new Phish fans, but to get a better idea of who exactly Phish is you won’t ever find it in a studio album. It’s recommended to check out the hundreds of concerts it’s made available online, or better yet check out a live show the next time the band comes to town.

Photographer by choice, writer by necessity. Since moving to Toronto in 2011 Morgan has become an active member of Toronto’s music scene. On any given night he can be found at various venues with his camera in hand. There’s nothing he loves more than exploring all the venues this wonderful city has to offer, discovering new bands and genres along the way.
RELATED ARTICLES
album reviewsfriendsphish
9.0