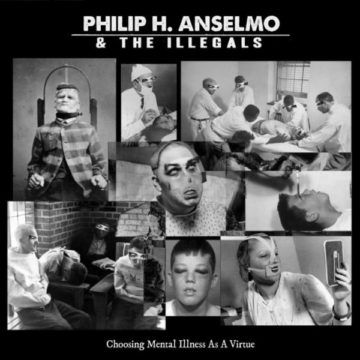 Philip H. Anselmo is not one to sit still for very long. While most known for his vocal work with Pantera, the metal legend keeps himself very busy with a number of side projects ranging from Down to Necrophagia. In the last two years alone, he has released Songs Of Darkness And Despair (a collaborative album with horror icon Bill Moseley), Caught Up In The Gears Of Application (the first Superjoint record in thirteen years), and the Grey and Red EPs with his newest band, Scour. For his first record of 2018, Anselmo is bringing his attention to The Illegals, a band he formed in 2013 with the release of their debut record, Walk Through Exits Only. While the band has since seen a handful of lineup changes, with original bassist Stephen Taylor covering guitar and the addition of guitarist Mike DeLeon and bassist Walter Howard, along with the return of original drummer Jose Manuel “Blue” Gonzales, Philip H. Anselmo & The Illegals is back with an explosive follow-up album, Choosing Mental Illness As A Virtue.

Anselmo and company waste no time getting into some of the heaviest tracks I have heard in quite some time. The opening song, “Little Fucking Heroes,” is a blistering assault driven by fuzzy and thickly-distorted guitars, chaotic drums, and Anselmo’s vicious vocals that sit confidentially between throaty screams and bellowing yells. Relentlessly, the album continues onto “Utopian” and the title track, two songs that refuse to let up in any regard.

Through incorporating a strong sense of rhythm, Anselmo & The Illegals is able to take elements of groove metal — a style pioneered by Pantera — and speed them up to ridiculous tempos in tone with death metal from the last two decades. As a result, the album embraces chaos in wild abundance. The musicianship required to perform at such speeds with such a degree of precision is certainly a feat to be admired. Such musicality is showcased throughout the entire record, but especially so on tracks like “Lone Wolf” and the closing track “Mixed Lunatic Results.”

Choosing Mental Illness As A Virtue is an insane record that channels Anselmo’s rage and targets it in a new direction that is slightly reminiscent of Pantera but takes direct influence from death metal icons of the likes of Morbid Angel and Portal — among others from the Australian metal scene which Anselmo is quite fond of — along with elements from modern metal bands such as The Dillinger Escape Plan. The result is a record that feels organic and at peace amongst the dense cloud of chaos that is mental illness. A record like this is certain to become a favourite among Anselmo’s fan base, and those who prefer the heavier side of metal. It will most definitely come further alive in a live setting.

A passion for music has always been a part of Gerrod’s life. As a young boy, he was raised on a steady diet of the music from The Chili Peppers, Aerosmith, The Stones, Prince, and others from his mum. Raised in the GTA, Gerrod continued to foster his love for music by attending a wide range of concerts and learning the drums. His unapologetic passion for music has no bounds and has spread to a wide variety of styles, whether it be the 90’s rock that sound tracked his teenage years, the jazz he studied in university, or his newfound love for hip-hop. He recently received his bachelors in music and education from York University and is passionate about writing and reviewing good (and less than good) music. Gerrod is also the drummer and songwriter for a Toronto based rock & roll band, One In The Chamber.
RELATED ARTICLES
album reviewsbill & philbill moseley
9.0