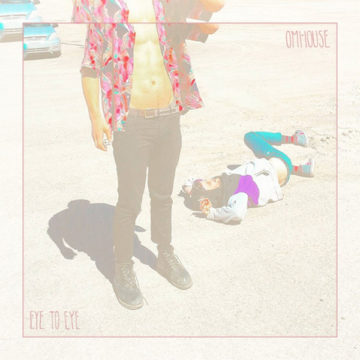 Omhouse’s Eye to Eye has been a long time in the making, and the wait was well worth it. Omhouse is a Toronto-based band and until recently was one person, Steven Foster. For Eye to Eye, Omhouse’s debut album, he has brought in three members to form a band. Evan Cartwright, Ben Harney and Sam Gleason have joined Foster to provide the suitable music to his vision.

Omhouse has released singles and an EP, but Eye to Eye is their first proper full-length album. And keep in mind their EP was issued in 2012. A wait of over five years is a lengthy time. However, fans will be happy to know that it was well worth the wait.

The album is full of thought-provoking songs that are not instantly accessible. But that is fine, as it is the type of album that requires a few spins before it begins to sink in exactly what Omhouse is trying to get across, both musically and lyrically.

There is no one sound on this album. Again, not a criticism, just a fact. The listener is not sure where the journey is going to take them once the album has started. There are aspects of folk, world music, pop, prog rock, art rock and everything in between. Foster melts it all together to create his own sound and his own musical direction. And keep in mind this is an album of a collection of songs sewn together. This album needs to be listened to in one sitting

Although fans will enjoy this album, what is clear is that this album goes in a different direction from his previous releases. Synths and computers are replaced (for the most part) by musicians, and this is not the only difference. Although fans will recognize Foster’s knack for a strong (albeit complicated) melody, there may be some surprises. However, the overall quality in writing has not disappeared and this is what should not only keep his old fans but gain new ones as well.

The album is well produced and expertly played. Lyrically, Foster explores themes of isolation, being alone, love found and lost, and figuring out relationships. “Hold still, you keep moving when I, Try to get a clear picture . . .” Foster sings in “Aurock.”

Eye to Eye is not a perfect album, but the album represents the beginning of an artist. An artist who is going to grow and explore and produce even more incredible music in the future. The fact is that Steven Foster, who really got his start as a session musician (drummer), has grown as an artist since we first heard from Omhouse. In the meantime, there is a great deal on this album to discover. It is a brilliant debut.

Born and raised in Whitby, Aaron discovered music through his love of The Beatles. This led to a career in radio, writing for various publications, and ultimately a radio show about The Beatles (Beatles Universe), which ran for over four years. When not immersed in music, Aaron enjoys spending time with the loves of his life -- his wife Andrea, and daughters Emily and Linda (all of whom have an intense love of music too).
RELATED ARTICLES
album reviewsaurockeye to eye
7.0