News
98
previous article
SPILL TRACK OF THE DAY: THE CUT LOSSES DEBUTS PSYCHEDELIC "IT'S ALL INSIDE MY HEAD"
next article
SPILL FESTIVAL REVIEW: ELECTRIC ISLAND FESTIVAL 2016 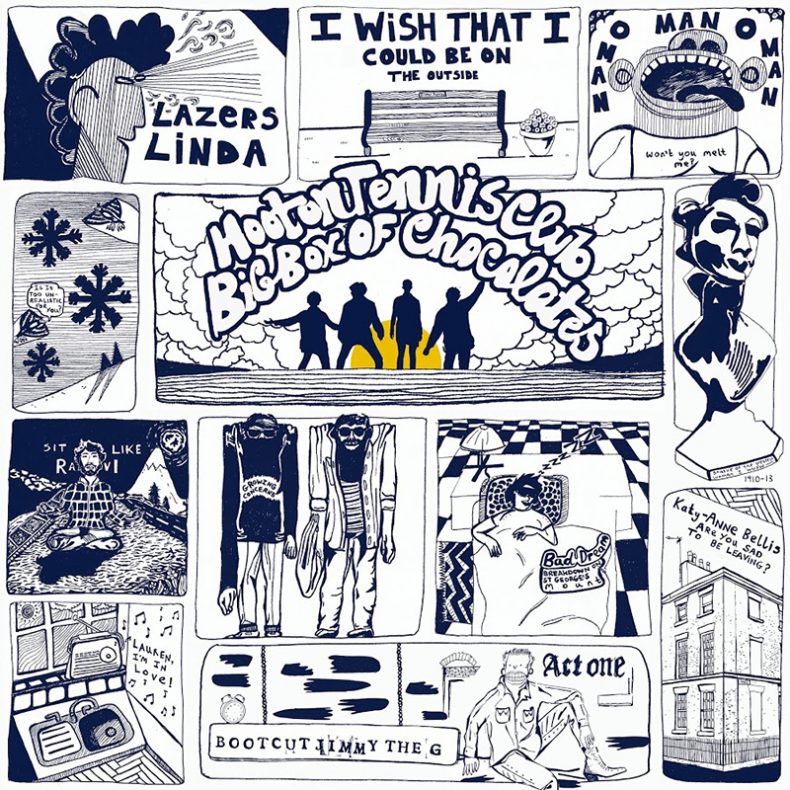 Clocking in at less than three minutes, it’s a brisk yet alluringly sincere ode to band member Ryan’s ex-flatmate, Katy-Anne, on which Ryan states: “She’d lived in the house for one year and three months. It’s just a mushy song about moving house and staying in touch”.

The song is the first to be revealed from the band’s forthcoming album, which was produced by Edwyn Collins at his Clashnarrow Studios in Helmsdale, Scotland.

If their debut album, Highest Point In Cliff Town was the band’s sprightly statement of intent, Big Box of Chocolates may well be their coming-of-age: a record that retains all the color and invention of their debut while being elevated by more rich instrumentation and lyrics that hint at slightly heavier themes: love and loss, nihilism and the ‘non-spaces’ of Northern England, all delivered in the band’s typically laconic, bittersweet style, like a Mersey Beat Murakami.

The dozen tracks continue the band’s knack of combining catchy off-kilter riffs with droll storytelling; album narrators – vocalists and guitarists Ryan Murphy and James Madden – seem to straddle optimism and uncertainty with their lyrics, whether singing about their internal worlds or commenting on a motley cast of characters (Bootcut Jimmy, BBC 6Music presenter Lauren Laverne, Lazers Linda…) who turn up across the album’s 41 minutes to amuse, tempt or torment them. Whether fictional (the awkward genius Jimmy ‘looking shifty in his new shoes’) or real (Ryan’s ex-housemate immortalised in first single ‘Katy-Anne Bellis’), each character shares an equal platform, all revered in Hooton’s own low-key way.

Recorded over three weeks in Helmsdale, during which time they all grew beards, drank copious amounts of tea, became birdwatchers and whiskey tipplers, the album reflects the band’s relaxed approach to songwriting ; they tend not to labor over recording demos or strumming and beating the life out of songs in the practice room –instead—ideas are allowed to form spontaneously: melodies are hummed into phones or computers, lyrics batted back and forth between Murphy and Madden, songs worked out alone in the bedroom, or layered up from scratch together in the studio.

Formed in Ellesmere Port in Cheshire in 2013, musically, their inspirations range from Big Star to Can while elsewhere; they’re influenced by authors who deliver a ‘down and out skewed view of the world’ like Kurt Vonnegut, Hermann Hesse, Henry Miller.

Having previously toured the UK and Europe, played countless festivals including Glastonbury and Green Man, five shows at SXSW and nine shows at CMJ New York, the band have announced an extensive U.K. and European tour at the end of the year.

SPILL NEWS strives to keep our readers up to date with news and events in the music industry. We keep you informed of the most recent information regarding new releases, tour dates, and information items about your favourite artists.
RELATED ARTICLES
big box of chocolatesheavenly recordingshooton tennis club
7.0