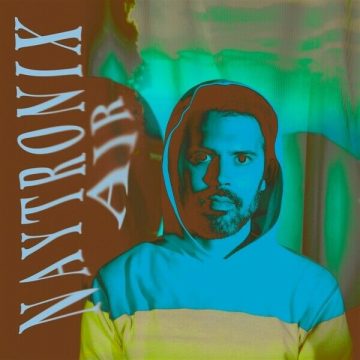 Nate Brenner brings us his third solo album, Air, under the name Naytronix. You may recognize him as being the bassist of Tune-Yards, and he is at it again.

His latest album is an interesting mix of symphonic melody and heavy bass-0laden tracks that are sure to intrigue. The album doesn’t push the boundaries, but it does a good job of paying tribute to past psychedelic rock. The most notable songs being “Dead Bird” where Nate seems to be talking about finding beauty in the strangest of places and “Actor in my Favorite Show.” The latter song gives a flight vibe of going through the static of television and brings the listener on a journey. It’s an interesting play at the least.

I don’t think this album is life changing or anything, but it is a fun listen. It’s not necessarily my cup of tea, but I think anyone can sit back and appreciate the artistry involved in creating an album like this, even if the lyrics are a bit repetitive and the vocals not super impressive.

The Spill Magazine is a Toronto-based online publication dedicated to covering the independent music scene with a strong focus on our thriving hometown talent. Our writers bring you up-to-date news, in-depth features on musicians and reviews for the latest CD releases. We also travel to the front lines for all local festivals including Canadian Music Week and North by Northeast. Don’t forget to check out our Facebook and Twitter pages for all daily Spill updates.
RELATED ARTICLES
airalbum reviewalbum reviews