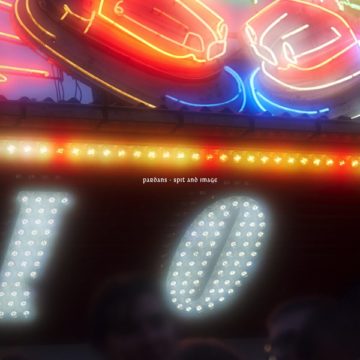 Out of the Mayhem Collective, which catapulted Iceage a few years ago, now comes Pardans. Pardans means something similar to ballroom dancing, though there isn’t much of that sound on their second release Spit and Image. It’s essentially a mix of no-wave and punk-rock, disguised as jazz-punk, as it was heard back in the late ‘70s and ‘80s scene. This was a time where acts such as Teenage Jesus and the Jerks, Lydia Lunch, and James White and the Blacks lay back at one end — and The Damned and The Birthday Party jammed hard at the other — all in an effort to just play the hell out of the youth of that era. Kids were tired of the music scene at that time, and would simply jump up and down in furious joy to the beat of the music. Pardans themselves refer to Birthday Party as an inspiration, and in many ways they live up to this through their strange madness and grotesque lyrics. Evidence of this can be seen in the opening track “Burning House Bedding”:

“Hypocrite lovers, my kindred spirits/
For love we yearned, with love we’re afflicted/
Hypocrite attendants, my fellow traitors/
Why do you scowl at me, you tokens of failure.”

The album continues with this same drive, but there’s also room for some slower tempo tracks as well. The almost classical guitar on “Ralle’s Theme” and “Love Run Loose” runs nicely with a beautiful, almost naked splendor. At the same time saxophone, arpeggio-guitar, Bratsch vocals, a very discreet rhythm section, and a humming men’s choir create an intense noire feeling underneath.

“I am the living spit and image of my deeds”, sings Gustav Berntsen on the title track of this explorative and explosive album from the Northwest end of Copenhagen.

From a Scandinavian record player in the middle of Copenhagen Jens Trapp brings you some new Scandinavian stuff. His favorite albums include: David Bowie: Honky Dory and Ziggy Stardust plus everything until Let's Dance The Clash: London Calling Elvis Costello: This Year's Model Genesis: The Lamb Lies Down on Broadway Pink Floyd: especially Wish You Were Here If I should name one, but most of it will do ;-)
RELATED ARTICLES
(hookers with) hidden depthsalbum reviewalbum reviews
9.0