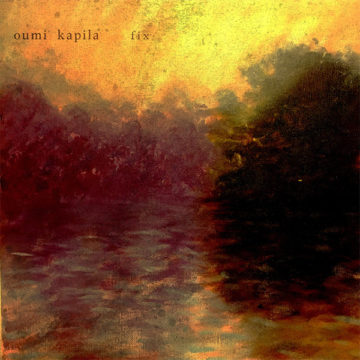 I have come to the point of never being surprised by anything Oumi Kapila does, I just accept that he does as he pleases whether or not it fits in your preconceived notion about him. Fix is his second solo album, and his second album for 2019 (Bending Stress was released in January). Neither album is what you would expect from the guitarist for Filter or from a member of Combichrist, but as I said, Kapila pretty well does as he pleases.

The music here is an interesting cross between ambient and classical music. It is very sparse, piano based and remarkably melodic. Kapila has created a very moody and brooding album full of songs that seep into you as you listen. The songs flow together and create a cohesive sound for the album. They are similar but different enough to keep your interest as you listen.

Instrumental albums are always somewhat tricky, and their audience is often limited. However, when it is done well, it is a rewarding experience. Kapila has provided the listener with a rewarding experience. Songs such as “Nocturne in D Minor” and “Heartfelt” flow from the speakers and the listener is immediately entering into a audio landscape. The music is simply divine.

There are no shocks, no big surprises and no big numbers. This is a beautifully executed, instrumental album full of beautiful melodies. It is well-produced and well-paced. What else could you want?  And quite frankly, this world could use some peaceful, beautiful music these days. It allows one to escape, if for only 40 minutes.

Born and raised in Whitby, Aaron discovered music through his love of The Beatles. This led to a career in radio, writing for various publications, and ultimately a radio show about The Beatles (Beatles Universe), which ran for over four years. When not immersed in music, Aaron enjoys spending time with the loves of his life -- his wife Andrea, and daughters Emily and Linda (all of whom have an intense love of music too).
RELATED ARTICLES
album reviewalbum reviewsfilter
9.0