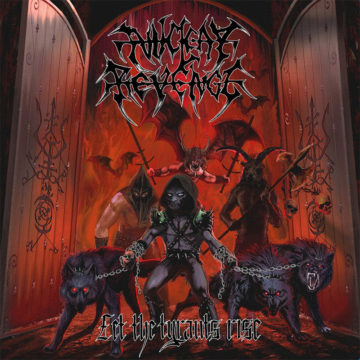 When listening to Nuclear Revenge’s debut full-length album you are instantly transported back in time back to 1986-87 when black metal and hardcore thrash was truly a thing of evil in the eyes and ears of the average metal fan who may have dabbled between big bands like Iron Maiden, Judas Priest, Metallica, and W.A.S.P. The sound is reminiscent of bands like Slayer, Celtic Frost, Possessed, Mayhem, Venom and others of that genre. Tiny advertisements for bands like that were hidden deep in the back the pages of Hit Parader, Circus, and Kerrang, and seemed darker, meaner and WAY more evil.

Spain’s Nuclear Revenge hits the mark with its sound and appearance, this blisteringly fast band gets things moving fiercely with unstoppable aggression as the first track hits 210 bpm. “We The Bastards” is a psychotically fast track that rivals the speed of Slayer’s “Angel of Death”. The fact that the album essentially opens with full-speed thrash and no lame, drawn-out intro is what immediately turned my head. Nuclear Revenge is the real deal. They look, sound, and feel like they were born for this.

As the album progresses, the band delivers more devastating tracks to the masses and unleash “Cursed Are Our Marks” a track loaded with unsettling mystical vibes and more speed to throw in your pipe and smoke. The album delivers some comic relief with a track titled “Last Beer”. The track opens with a crack of a beer and a huge belch before jumping straight into classic D.R.I. style cymbal chokes, throwing you right back into blinding speed metal. As the track wraps up, an even bigger belch bookends this hilarious track.

“Lucifer’s Slave” is certainly a standout track and a brutal assault on the ears. The drummer really shows up for this one when at the 53-second mark he busts out his burning double kicks, really driving this track through the wall. The SICK speed riffs blow your head off all while the evil vocalist sounds like a cokehead demon from the crypt.

“Cross the Gate” may take the win for the heaviest intro. It’s wicked triplet guitar riff and drumbeat sets this track off just right for a tight intro before morphing back into pure speed metal thrash. The blistering speed will leave your ears burning and simply keep you out of breath. As we get to the final track of the album, the lads of Nuclear Revenge decided to get rather unholy during the final track titled “From Aethernity To Conquest”. The track opens with unsettling atonal harmonized guitars, evil whispers from a dark spirit, and the distant sound of a church bell.

For fans of old school ‘80s thrash and speed metal, this is your ticket! If ten seconds is all it takes for this band to have you hooked, they are doing something truly amazing. These guys are fast, mean, and deadly, and must be heard!

Andre has been writing for The Spill Magazine for over 12 years, dating back to the print days. His passion for music goes far beyond writing reviews for new music and live concerts, he is also an active musician and producer on the Canadian music scene. Having toured North America and Europe with various acts, he is no stranger to dedication and work ethic new bands must endure to make the grade in today's market; Andre always delivers perspective writing that is authentic and to the point. Mr. Skinner typically covers indie rock, grass roots, electronica and is our resident hard rock and heavy metal specialist. He is extremely selective on what bands he covers for articles and you can rest assured they are ALWAYS band to watch with something left of centre to offer.
RELATED ARTICLES
album reviewalbum reviews
8.0