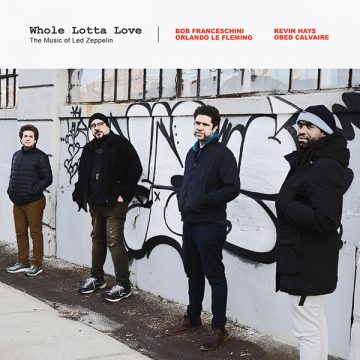 I went to jazz school and in a first-year jazz performance workshop, a guitarist bent a note in his solo, to which my professor – truly one of the greatest guitar players I’ve witnessed – called the band to a halt as he yelled, “no fucking vibrato! Do you think this is Led Zeppelin?” That moment lives rent free in my mind and I can’t help but smirk as I review Whole Lotta Love: The Music Of Led Zeppelin, a collection of Zeppelin’s greatest hits orchestrated, arranged, and performed in the context of jazz by Obed Calvaire, Bob Franceschini, Kevin Hays, and Orlando Le Fleming. What easily could have fallen flat as a novelty soars due to a strong performance from the band that ultimately breathes a new sense of life into the classic catalogue and songwriting of Jimmy Page and Robert Plant.

Opening with the titular track, the sound of softly swung drums, a plucked upright bass, and the warm echo of a piano as accented but the sharp tone of an alto saxophone that cuts through the air, performing the iconic riff and Plant’s vocal melodies. The song is very recognizable until the band breaks into the solo sections and, when returning to the hook at the end, shift from the upbeat swung pulse into a driving, straight ahead beat. This band pulls no punches. “Dazed And Confused” only furthers this with a spacious and atmospheric direct reinterpretation of the original. Over the five-minute performance, the band bounces between the different parts of the song, ensuring that every note played counts. The conviction in this performance is crucial. “Immigrant Song” sees them flex their abilities as arrangers and performing a loose interpretation of the original. Trading in the bombast and hard rock nature of the original comes a haunting and melancholic mood, effectively turning “Immigrant Song” into a ballad.

Every song on Whole Lotta Love: The Music Of Led Zeppelin is a highlight all to itself. “Kashmir” is an atypical and polyrhythmic journey into the mysticism that Zeppelin only hinted about while “For Your Life” and “Custard Pie” both flaunt an effortless strut. “The Battle Of Evermore” takes the tone of a stirring and soaring ballad whereas “In My Time Of Dying” delivers a funky groove coloured by blue notes and unique harmonies without disrupting the lingering darkness of the original. The album comes to a strong close with an absolutely stunning cover of “No Quarter”.

Whole Lotta Love: The Music Of Led Zeppelin demonstrates a band in top form as they take these songs, tracks that are considered quintessential to the rock ‘n’ roll lexicon, and flip them into what sounds as if they’re jazz standards. Their ability to do so lies in their excellent performance – the musicality from all members is stellar – and their conviction. A lesser band would have played a note for note transcription with a swung element and called it a day; however, Calvaire, Franceschini, Hays, and Fleming outclass their peers and bring justice to the legacy of Led Zeppelin. Furthermore, this album speaks bounds to the songwriting and performance of Zeppelin; there is something universally timeless to their work and Whole Lotta Love: The Music Of Led Zeppelin emphasises just that at its heart. Calvaire, Franceschini, Hays, and Fleming have delivered an incredible and passionate album, front to back, and will leave you feeling genuinely thrilled with such a revitalized rendition of some of Zeppelin’s greatest songs – just don’t tell the jazz police.

A passion for music has always been a part of Gerrod’s life. As a young boy, he was raised on a steady diet of the music from The Chili Peppers, Aerosmith, The Stones, Prince, and others from his mum. Raised in the GTA, Gerrod continued to foster his love for music by attending a wide range of concerts and learning the drums. His unapologetic passion for music has no bounds and has spread to a wide variety of styles, whether it be the 90’s rock that sound tracked his teenage years, the jazz he studied in university, or his newfound love for hip-hop. He recently received his bachelors in music and education from York University and is passionate about writing and reviewing good (and less than good) music. Gerrod is also the drummer and songwriter for a Toronto based rock & roll band, One In The Chamber.
RELATED ARTICLES
album reviewalbum reviewsled zeppelin
8.0