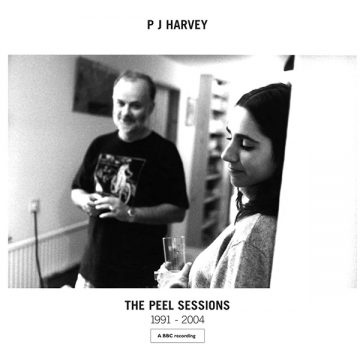 A comprehensive re-issue campaign is underway to re-release all of PJ Harvey’s back catalog on vinyl across 2020 and 2021, so if you’re new to her music or looking to reconnect with it once again, the release of The Peel Sessions 1991-2004 is an excellent place to start.

Late BBC Radio 1 DJ John Peel was host of the long-running Peel Sessions, in which an artist would come in and record a handful of songs live. The beauty of The Peel Sessions 1991-2004 is that it represents the best of those live recordings through the years, providing both a nice sampling of PJ Harvey’s career and a glimpse into the way her music has evolved through time. The end result is a fantastic, lively collection of PJ Harvey tracks that can now be rocked with the full backing of your vinyl stereo system.

The first quartet of songs harkens back to 1991, with opener “Oh My Lover”, a delightfully indie-grunge song that foreshadows the feminine angst that would crystallize later in the decade with artists like Alanis Morrisette or Garbage or Fiona Apple, among others. “Sheela-Na-Gig” gets an excellent take here as a hard-rocking track, with it’s classic refrain, “Gonna wash that man right out of my hair/gonna take my hips to a man who cares” sung defiantly as the drums crash along in the background.

Next is two tracks from 1993, “Naked Cousin” and “Wang Dang Doodle”, the latter of which is a bluesier take, Harvey twisting her voice all over, singing “we’re gonna get that wang dang doodle all night long/all night long” and is a good example of the live, one-take format allowing a looseness into the performances that is hard to achieve in a more formal studio version, and what makes this whole collection special.

A trio of songs from 1996 feature next, and “Snake” stands out, as Harvey chants, “You snake, you dog!” until she’s overcome with what sounds like agony, losing her voice from shouting in a wonderful performance where you can feel her pouring her whole soul into the song.

The closing trio of songs come from the 2000s, and concludes with “You Come Through” a tribute to John Peel that is touching and sentimental, and is the perfect closing note on their decades-plus time together. One thing that’s true throughout the album, is that Harvey clearly seems to be putting forth her best effort to impress her late friend John Peel, and the best part is that we all get to hear those electric sessions captured on record. These are hard, grungy tracks, performed with a uniqueness and love and passion that would make them a very special addition to anyone’s vinyl collection.

Dan Kennard is an English teacher and fiction writer living outside Kansas City, Kansas where he lives with his wife and children. More about his work can be found at amazon.com/author/dankennard. You can also follow him on Twitter and Instagram @kennardistry or contact him at kennardistry@gmail.com.
RELATED ARTICLES
album reviewalbum reviewsume
7.0