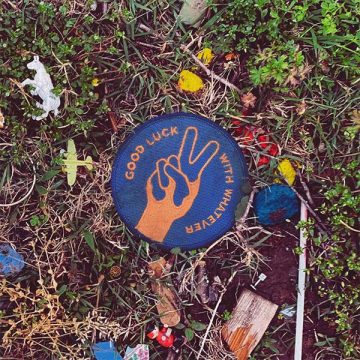 Recorded in Nashville under the guidance of six-time Grammy-winner Dave Cobb, veteran rock band Dawes returns with their seventh album, Good Luck With Whatever, a 9-track collection of mellow, story-driven piano rock that explores themes of adulthood and change and time and technology with graceful melodies and sharp lyrics from frontman Taylor Goldsmith.

Opening track “Still Feel Like a Kid” sets the tone as a straightforward song about how strange it feels to think of yourself as an adult, but title-track “Good Luck With Whatever” is where the album starts to gain depth. It’s perhaps the strongest song on the album; catchy and interesting with knobby riffs and a thrumming guitar that circles around to a chorus that rises up and washes over you each time in a way that is truly satisfying. “Between The Zero And The One” features a lively piano and put me in mind of Jackson Browne. “None Of My Business” is more charged with guitar, the music almost working as a supporting soundtrack to the lyrics, the guitar revving up the tension the whole time.

“St. Augustine At Night” is a standout track as well, with a more acoustic, softened opening, and it’s easy to imagine the beach in the background, the waves sloshing, but the sun is setting on more than just the day as the speaker looks back fondly at childhood and memories. With a gentle melody, this is a somber, serious, reflective song—practically spiritual. “I don’t talk about mistakes, I don’t talk about regrets/I’m not sure at this point what good it would do,” he sings.

The rest of the album is artfully arranged, with “Who Do You Think You’re Talking To?” picking up the pace again, as if shaking off the emotions of the last song before “Didn’t Fix Me” slows it back down again and has me thinking of The Eagles while the piano ripples through the chorus beautifully. The whole album alternates like that, speeding up and slowing down from track-to-track and telling stories with lyrics that are theatrical in the sense that the story of each song is animated by the music, pushing Goldsmith’s words front and center for us to consider and reconsider.

In “Free As We Want to Be” he critiques our general technology addiction, singing, “If I don’t look up from the mirror in my hands/I’m gonna miss what’s on TV” as he rolls towards the chorus, challenging us to individually consider that “we’re as free as we want to be.” Closing track “Me Especially” has a searing guitar to open, a lazy bass plucking along in the back, and is a melancholy, nostalgic song suggesting the strange recognition that more time has passed than you ever realized. It’s a great closer to an album about growing up and leaving the past behind in order to accept the inevitability of change while also acknowledging the melancholy that often accompanies the hindsight of advancing age.

Overall, the album grows on you, the stories deepen with each listen, and the order of the songs and the arrangement is thoughtful and deliberate. Under the guidance of Dave Cobb, every song here is well-crafted, with lyrics that use their space well to tell rich tales of time gone by, moments passed, and a future that is anything but bright and clear.

Dan Kennard is an English teacher and fiction writer living outside Kansas City, Kansas where he lives with his wife and children. More about his work can be found at amazon.com/author/dankennard. You can also follow him on Twitter and Instagram @kennardistry or contact him at [email protected]
RELATED ARTICLES
album reviewalbum reviewsrounder records
10