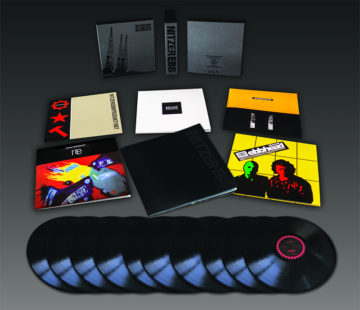 The title for this expansive box set says it all. Ten albums (vinyl) featuring all five of the albums they originally released on Geffen (North America) and Mute (U.K./Europe). Those albums are: That Total Age; Belief; Showtime; Ebb Head; Big Hit; and their debut album, Basic Pain Procedure (originally released independently). However, Basic Pain Procedure is only available as part of the colour vinyl set, not the regular black vinyl box set.  The colour set is only available through the Pylon Records website. In addition bonus tracks featuring b-sides, remixes and rarities. For the Nitzer Ebb fan who needs to have everything, this is a good set to own. This is, thus far, only available on vinyl. These albums have been out of print since the 1990’s and this is a chance for fans to either update or complete their collection..

Nitzer Ebb formed in 1982, with the three original members being Vaughan ‘Bob’ Harris (programming, synthesizers, drums and vocals), Douglas McCarthy (vocals) and Dave Gooday (drums). The band went through several member changes, with Gooday being the first to leave, in 1993. Up until 1995, when they seemed to call it a day, Harris and McCarty were the constant and consistent members. By 2006, the band had reformed and new music was forthcoming from the band, much to their fans delight. Again, the band was centred around McCarthy and Harris.

The interesting thing about box sets, such as this, is that it shows the development of a band. Nitzer Ebb is a heavy electronic dance band, that have their roots in industrial music. They are also pioneers in this genre. They were always years ahead of others and several bands feel in line behind them. This set demonstrates why they were so influential, from their beginning. On the surface it sounds like angry, electronic music. But Nitzer Ebb have always been more, much more. 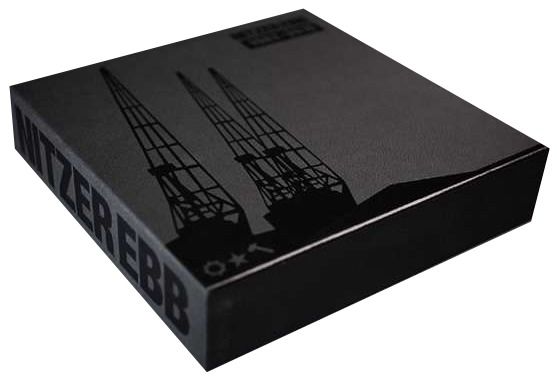 Lyrically they are dark, but dark with a purpose. Give “Living In A Bag” (Big Hit, 1995) a listen.  A more mellow piece with the vocals almost buried at times. But listen and you hear such gems as “So step behind the wheel we’ll drive though the gloom. Come sit down next to me and we’ll try.” Optimistic, hopeful and realistic all at the same time. Perhaps not known for their lyrics, they wrote some brilliant lyrics throughout their career. This set allows one to track their the growth of this band and how they expressed themselves.

There is no way to go through each album. But one can hear how they developed as a band throughout the years; developing more sophisticated tunes, incorporating many different sounds. Compare “Murderous” (1987, That Total Age) to any thing from Ebb Head (1991) and one can hear the how this band developed. Same genre of music, same style, but different layers and different effects. McCarthy seemed to gain more confidence as a singer and he used his voice for different effects as the band began experimenting and adding to their sound.

The only issue with this reissue is that while all of their studio albums are there, including the wonderful As Is EP, there is still a great deal missing. The Machineries Of Joy EP with Die Krupps (1989) is one example.  The previous compilation Body of Work (2006) did an admirable job of collecting b-sides and EP tracks, and is well worth exploring. Also, to be clear, their 2010 album, Industrial Complex, is not included but there is a space in the box to fit your copy to make the box set complete These are small, but critical complaints.

The packaging for 1982 – 2010 Box Set  is outstanding, with the the core members of Nitzer Ebb contributing to the beautiful and extensive liner notes. A great deal of thought was put into this release, and it shows. The albums have their original sleeves and packaging and the remasters sound great. The bonus material is nice, but, sadly, not comprehensive. This is a great set for new and old fans.

On a final note, the albums will be issued on stand alone CDs, featuring many bonus tracks, on October 19th, 2018.