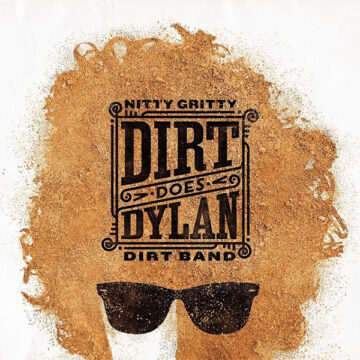 One American folk-(ish) institution pays tribute to another, even more elevated American folk(-ish) institution. The Dirt Band is multi-generational these days, with lead vocalists/ guitarists Jeff Hanna and Jaime Hanna, father and son respectively. There also have a new fiddler in Ross Holmes, and singer/ songwriter/ bassist Jim Photoglo cements his band membership as well. The album also features a host of special guests as well.

The repertoire itself? Well, these 10 tracks seem much more of a personal tribute rather than a “let’s take a bunch of Bob Dylan’s best songs and re-do them” album. “Country Pie” is a surprise, not a tune that’s one of my favourites by any means, but Jeff takes the lead, aided by keyboard player Bob Carpenter, who also helps with the…er…whistling. It does fit the Dirt Band’s ethos rather well, though, and this set, a little surprisingly, is perhaps as much about the Dirt Band as it is about Dylan.

More expected perhaps is “The Times They Are A-Changing’” with Roseanne Cash, The War & Treaty, Jason Isbell and Steve Earle all contributing, whilst blues-rock duo Larkin Poe lend vocals and steel guitar to the erstwhile oft-covered “I Shall Be Released”. “Tonight I’ll Be Staying Here With You” makes for a classy opener; “It Takes A Lot To Laugh, It Takes A Train To Cry” has a wonderful blues groove. “She Belongs To Me” has echoes of The Byrds, closer “Quinn The Eskimo (The Mighty Quinn)” is a very fine “let’s all join in” performance, and “Forever Young” benefits greatly from its country twang. It’s only the one song (though every song here is far more than worth a listen), but The Dirt Band Improves On Dylan? I don’t think they’d get away with that title.

Norman Darwen grew up in north-west England admiring Elvis’ gold lamé jacket, Lord Kitchener’s way with words, and his much older brother’s and sister’s dancing to The Rolling Stones’ ‘Little Red Rooster’ on the telly. He’d wind aforementioned brother up by reading the entire contents of an R’n’B magazine he used to have to collect from his local shop for him and then reciting back as much as he could remember. Some years later he’d wind up his own friends by telling them who these people were that Led Zeppelin etc were covering – Willie Dixon, Howling Wolf, Otis Rush etc. These days he still listens to the blues, but has added a taste for reggae, zouk, rap, folk and anything else that takes his fancy…
RELATED ARTICLES
album reviewalbum reviewsbob dylan
9.0