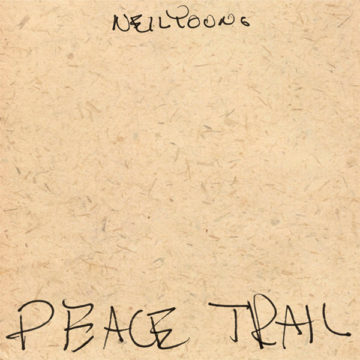 Neil Young returns with his 37th studio album and second new release this year, Peace Trail. Throughout the 10 songs we hear Neil characteristically protesting – this time he specifically targets the media, smart phone junkies, and of course, the government. More specifically, he is protesting the new government that will take over next month, and his disdain for Donald Trump is not so subtle on Peace Trail. Tracks like “Indian Givers” and “Terrorist Suicide Hang Gliders” show that Young is not too pleased with the President-elect. Of course there is an environmental aspect to the album, which is nothing new from Young.

The album begins with the mostly delightful title track, which features some subtle organ riffs, moderately bringing back the gentle feel of his 1992 classic, Harvest Moon. Sadly, it doesn’t stay that good for long.

Peace Trail, musically, and even lyrically to an extent, is on the weaker side of the iconic singer-songwriter’s catalog. While Young’s output this century has been very spotty when compared to his early work, he can still manage to release a gem – Le Noise and Psychedelic Pill are perfect examples. The latter may actually be the best Crazy Horse release since Zuma. Unfortunately Peace Trail does not fully live up to these two recent albums.

One thing bogging down the album is Young’s use of Auto-Tune. It only makes an appearance on two tracks (“Peace Trail” and “My Pledge”), but it feels incredibly out of place on a Neil Young record. Who knows, perhaps he’s trying to channel his inner Drake? Still, Young doesn’t seem too concerned with what the public thinks about him. On “Can’t Stop Workin’” the 71-year-old musician hints that he plans on making albums until he drops.

Had Young worked on these tracks a little longer, he may have had a great album on his hands. Their bare bones are all here, the songs just needs a little more fine-tuning. It’s fair to say that most fans these days aren’t expecting the quality of After the Gold Rush or On the Beach, but they would like to see more than a trace of his brilliant past.

As a child growing up in the suburbs, Ryan found music as a way to soothe his boredom. After first hearing AC/DC at the age of 10, he was hooked on music. Tracing its roots to the ‘50s, he became obsessed with Elvis, Buddy Holly and Chuck Berry. Somehow that led to grunge, then psych-rock, then jazz, etc. The list goes on and on and his collection of vinyl records continues to grow.
RELATED ARTICLES
album reviewsneil youngreprise
7.0