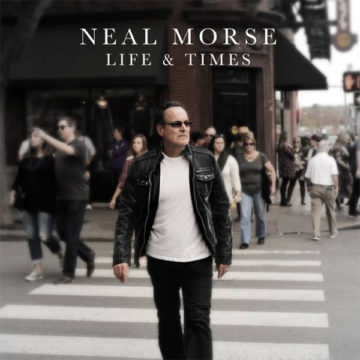 Neal Morse is one busy guy. It is time for his 19th solo studio album, and a further two studio albums as The Neal Morse Band. He released two albums in 2016, one solo and one with The Neal Morse Band. Add on to that the numerous bands with whom he has been involved (Spock’s Beard, Transatlantic, Flying Colors, Morse, Portnoy & George, and Yellow Matter Custard), and his output is staggering

Through it all, Morse has never done the expected nor has he followed one genre. For Life & Times, he is recreating himself as a singer/songwriter. Perhaps he has done songs in this vein in the past, but this album is different. He has worked extremely hard to craft an album full of songs/stories that at some point will resonate with the listener. And in actual fact, he has recorded an incredibly warm album. This is an album that invites you in, makes you tea, stokes the fire and gets you comfortable. I have not felt this welcomed by an album in a very long time.

How does he do it? Well, Life & Times is an album of stories. Morse has a knack for telling short, meaningful, engaging stories in under four minutes. He then arranges the music to fit a mood. And for the most part that mood is very upbeat and positive. But that does not mean he is afraid to tackle some darker areas. “He Died At Home” is a beautiful and moving song about a soldier dealing with Post-Traumatic Stress Disorder and attempting to adapt to civilian life.

But Morse remains optimistic and somewhat humble throughout the album. “I just thought I’d write a song, to tell you all the way I feel. But it ain’t no big deal,” he sings in the opening song “Livin’ Lightly.” In fact, it is the opening line to the entire album. And while he may not think it a big deal, this album is full of big deals. But he refrains from being preachy. He is not going to tell the listener how to live their life, but rather discuss his feelings and his emotions, and perhaps they resonate with the listener in some way.

The album serves as a travelogue of sorts as well. While touring in 2017 (“The Road Called Home” tour), he seemed inspired by his various surroundings and they ended up in songs. “Manchester” and “Selfie In The Square” are just two examples. Clever lyrics and perfect musical accompaniment.

This is the definitive singer/songwriter album. These do not come along often, so when they do, they are something to be embraced. A brilliant album.

Born and raised in Whitby, Aaron discovered music through his love of The Beatles. This led to a career in radio, writing for various publications, and ultimately a radio show about The Beatles (Beatles Universe), which ran for over four years. When not immersed in music, Aaron enjoys spending time with the loves of his life -- his wife Andrea, and daughters Emily and Linda (all of whom have an intense love of music too).
RELATED ARTICLES
album reviewshe died at homelife & times
8.0