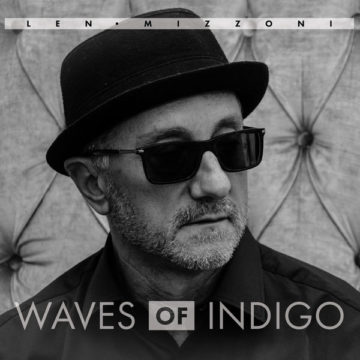 Len Mizzoni is no stranger to the music business. A one-time member of Frozen Ghost, Mizzoni has been solo for the last few years. This resulted in 2016’s EP, Special Love. His latest release, Waves of Indigo, basically picks up where Special Love left off: quality light jazz mixed in with pop. Mizzoni considers Waves of Indigo as his first full-length album. To that end, it is one impressive debut album.

Mizzoni is an accomplished guitarist and writer. He has worked as a session musician for years, and this has allowed him to work with many different musicians in many different genres. As such, he has developed the ability to play in many styles, but on Waves of Indigo he is able to present his own distinct style. He can evoke a great deal of emotion in his playing before he even opens his mouth to sing. Mind you, his voice is not only pleasant; it is intriguing. As he sings, you may find yourself listening even closer to catch the words he is singing.

The album features 12 songs and opens with “Boogeyman.” The piano sets the tone, invoking Shakespeare, and he advises that “music takes your mind off everything.” Of course, he is right. Later in “Boogeyman, he sings, “Don’t be afraid of the boogeyman.” Mizzoni is not talking of monsters under the bed, but rather saying to let yourself get lost in music. And that is the overall theme of the album. Lose yourself, enjoy the rhythms, the beats, the playing. Don’t be afraid to let go and get lost.

In this day and age, it’s a lovely sentiment. Music can be political, can be a cry to war, can be a love song, or can be escape. Mizzoni chooses to sing love songs and let the listener leave their troubles at the door. Mizzoni has ventured into songs with a more social meaning (he did release the brilliant “Stop,” an anti-bullying song last year as a one-off single, but it is not featured on this album, nor would it have fit), but here, Mizzoni has created a peaceful oasis in a crazy world. And in doing so, he has made a fine, loving album. It would make a perfect Valentine’s Day gift or serve as the perfect soundtrack during a Valentine’s Day date.

The album is very slick, well-produced and has a beautiful flow. There is, however, a sameness throughout the album. I was hoping there would be a few surprises thrown in, but that is fine. He is not trying to shock or startle. Mizzoni has created a very jazzy, soulful pop album.

Born and raised in Whitby, Aaron discovered music through his love of The Beatles. This led to a career in radio, writing for various publications, and ultimately a radio show about The Beatles (Beatles Universe), which ran for over four years. When not immersed in music, Aaron enjoys spending time with the loves of his life -- his wife Andrea, and daughters Emily and Linda (all of whom have an intense love of music too).
RELATED ARTICLES
album reviewslen mizzoniwaves of indigo
7.0