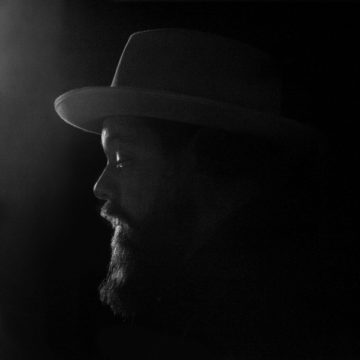 Tearing at the Seams is an album with two feet (or perhaps, as there are 7 band members, 14 feet) rooted firmly in the past.  It is fitting then that the band’s label is the recently rejuvenated Stax Records, for this is an album that knows and celebrates its roots, settling itself in comfortably alongside the sound and swagger of the legendary catalogue of Stax hits.

Indeed, the album as a whole is not just rooted in the past but fully reminiscent of the golden years of Stax, complete with vibrant and integral horns (that baritone sax is something special), organ, a steadily funky rhythm section, and a vocalist who can carry any song with out taking it over.  Right out of the blocks, “Shoe Boot” establishes all of these aspects as strengths; in truth it feels like a song that came out of a jam session in which Rateliff simply said ‘okay guys, lay down something legendary and I’ll do my thing on top’.  Though it is not anywhere near as funky (because the strongest song in that regard is without a doubt “Intro”, which is a whirlwind tour through the sound of the 1960s), second track “Be There” continues the pattern of relying on the Motown-infused horns to be all the melodic punctuation for the song while the rhythm section chugs along in the background. “Say It Louder” has you briefly believing that the band has turned its attention to early country/folk before being rescued by the ever-present horns halfway through the next track “Hey Mama”.  If there is a statement of musical intent on this album, it is made there – this will not, like the band’s 2015 self-titled debut, be an album in which multiple musical genres are explored and none settled on; no, this is an album that clearly intends to embrace and celebrate all that made Stax what it once was.

Also setting itself apart from the band’s debut album is the fullness of the sound on Tearing at the Seams; whether it be instrumental decisions or changes in production methods, this is an album that sounds incredibly full and polished while still maintaining the emotional authenticity and organic development of the sound it is trying to capture. In short, this album feels like a band in the fullness of their powers as well as a band that will put on an incredible live show (wait until May 19 for a live review from Massey Hall!).  If there is an area for continued growth it is Rateliff’s tendency towards lyrical repetition; though it is not as apparent (or blunt) here as in past efforts (especially his solo work prior to the Night Sweats), “Say It Louder”, “Hey Mama”, and especially “Coolin’ Out” definitely feel like they are heading in that direction before the reins are pulled back enough to save the songs.

This album is guaranteed to get the feet tapping and the hips swaying, let alone get you belting out the choruses; it is a small slice of all that was good about the music of the late 1960s and yet feels as relevant as ever … and perhaps as much a celebration of that time as it is an ode to it.  Here’s a sentence I never thought I’d say – bring on the Night Sweats!

Br. lives in southern Ontario, grew up on The Beatles and The Journeymen, spent his adolescence immersed in grunge, and his adulthood in British alternative. His greatest joy is seeing his son dance and grow into his own appreciation of the indescribable joy of music...
RELATED ARTICLES
album reviewsstax records
9.0