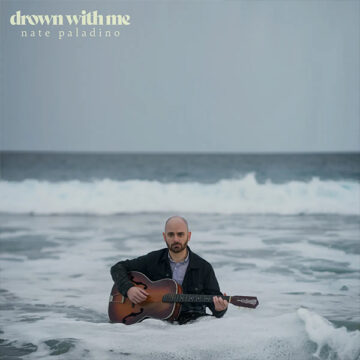 Nate Paladino
Drown With Me
Independent

If Drown with Me sounds like a bit of a dark, bleak title for an album, you are actually on the right track with the latest album by Orange County, CA singer songwriter Nate Paladino.

But what does sunny, balmy Orange County have to do with bleakness. As Paladino explains himself, “The more perfect the picture is, the more blind we can be to the emptiness and despondency behind it. I like exploring the cracks in the veneer and giving the messier details their due.”

Yet, what adds an additional element of darkness to the proceedings here is the fact that bassist Darren Faller who initially started out recording the album with Paladino back in 2019 died suddenly during the recording sessions. The recordings stopped, that stop was prolonged by the pandemic. That stop and the events that caused it enabled Paladino and all involved in the recordings to approach the songs with another outlook, but at the same time adding an emotional element to the songs, Paladino’s vocals, and recordings, that give Drown With Me a specific edge that really makes them work.