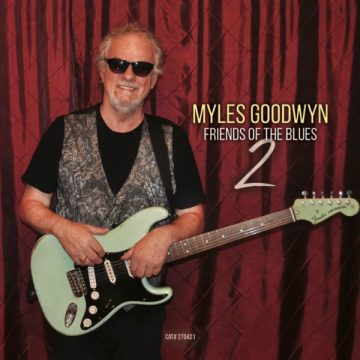 Last year Myles Goodwyn released a hugely successful album, Friends of The Blues. On it, Goodwyn explored his first love and the blues along with many friends. On Friends Of The Blues 2, Goodwyn tries to recapture the magic from that album, and for the most part he succeeds. This is a great, rocking album featuring Goodwyn and his peers performing some pretty amazing blues.

The album consists of 13 tracks, the majority of which are written by Goodwyn. One of the more interesting songs is a cover of Bobby Womack’s “Over Now,” which was previously made famous by The Rolling Stones. Here Goodwyn captures the bluesy origin of the song beautifully,making it a cornerstone of the album. It sets the tone for the album and the other songs follow inline. Another noteworthy cover, “Speedo (Revisited),” originally by The Coasters, is a fun take on the song and a tip of his hat to 1950s rock ‘n’ roll.

Goodwyn, who handles lead vocals, guitar and piano, is backed throughout the album by Bruce Dixon and Richard Palluson bass, as well as a number of drummers that includes JR Smith, Scott Ferguson, Mike Carrol, and Blair MacKay. Reeny Smith and Lisa MacDougall contribute backing vocals. The album sounds like it was captured live off the floor, a perfect sound for a blues-oriented album.

While Friends Of The Blues 2 does not have the same impact as the first, as sequels seldom do, it is nonetheless a pretty powerful album. The musicianship is exceptional and, for the most part, the songs all flow together. Goodwyn knocks it out of the park, again!

Born and raised in Whitby, Aaron discovered music through his love of The Beatles. This led to a career in radio, writing for various publications, and ultimately a radio show about The Beatles (Beatles Universe), which ran for over four years. When not immersed in music, Aaron enjoys spending time with the loves of his life -- his wife Andrea, and daughters Emily and Linda (all of whom have an intense love of music too).
RELATED ARTICLES
album reviewalbum reviewsapril wine
8.0