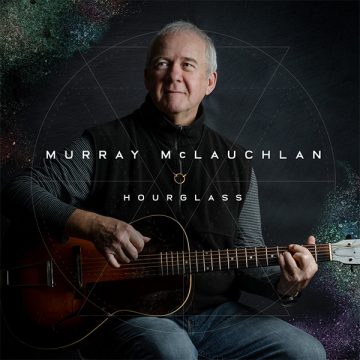 Murray McLauchlan’s debut album, Song From The Street was released 50 years ago. In all the years since that debut, McLauchlan has done pretty much what he wanted to do, and he does it extremely well. He has never been one to be concerned with the current trends, often going against them and it has always worked in his favour. Over the years he has created bona fide classics and he is not slowing down. Hourglass is his 20th studio album, and although these words have been written before, it may be one of his strongest albums ever.

For Hourglass, McLauchlan is taking a good hard look at the world and himself as is evident on “I Live On A White Cloud (For George Floyd”, and has put his thoughts down into some of his most powerful songs of his career. McLauchlan does not shy away from his honest view. Give “America” a spin and listen as he begs the US to “please stop doing things that tear you apart”. Quite a visual, and as stark as that statement is, he does offer hope in the song.

On Hourglass, he tackles systemic racism, privilege, and economic disparity, and he does it with a great deal of passion and eloquence. He even tackles COVID-19 with the rather amusing “Pandemic Blues”.  Because these songs started as poems, they read beautifully in that context but as lyrics they demonstrate his brilliant use of words. He also delivers one of his most beautiful songs with the moving “A Thompson Day (For Tom Thompson)”. Again, McLauchlan turns his song into a painting, one of strength, power and beauty. It is a work of art.

Although the topics are rather heavy, he does not sacrifice melody. In fact, McLauchlan writes some incredible melodies for this album, and one would be forgiven for getting lost in the music. He is ably assisted by wonderful steel guitar from Burke Carroll and tasteful bass from Victor Bateman. Al Cross shows perfect restraint on drums and Vezi Tayyeb provides the keyboard fills throughout the album. The band is perfect for McLachlan and his guitar work, and it feels like old friends, who are comfortable with each other contributing to each song. It is extremely well-produced, well-recorded and immaculately arranged.

Musically this is mellow, laid-back McLauchlan, in some ways reminiscent of the Whispering Rain days, but his multiple musical excursions lead the songs into many different avenues.  The album, as a whole, is quite consistent but McLauchlan throws in some twists and turns which make the album that much more enjoyable.

Hourglass is as far away as possible from his last album, Love Can’t Tell Time, both musically and lyrically. But that is what we have come to expect from McLauchlan. On Hourglass, although it is more somber, and heavy at times, it is not a message album. He is not banging you on the head with slogans, he is reflecting as an artist and a human, and that is the power of Hourglass. McLauchlan is merely opening the blinds for us and he does it so eloquently. Simply put, Hourglass is one that will stand the test of time and add new songs to his growing lists of classics.

Born and raised in Whitby, Aaron discovered music through his love of The Beatles. This led to a career in radio, writing for various publications, and ultimately a radio show about The Beatles (Beatles Universe), which ran for over four years. When not immersed in music, Aaron enjoys spending time with the loves of his life -- his wife Andrea, and daughters Emily and Linda (all of whom have an intense love of music too).
RELATED ARTICLES
a thomson day (for tom thomson)album reviewalbum reviews