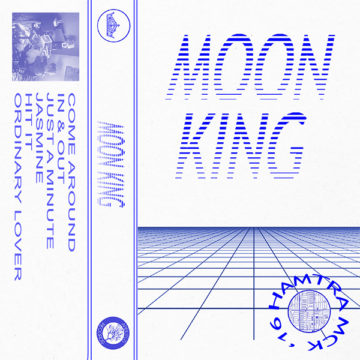 Moon King’s new EP Hamtramck ‘16 steps a million miles away from his previous eclectic dream pop sound into new territory: disco. The moniker of producer, singer and songwriter Daniel Benjamin, Moon King draws the inspiration for his style shift from a personal seachange. Originally hailing from Toronto, Benjamin last year moved to the musically diverse neighbourhood of Hamtramck. Released as a cassette, the 5-track EP named after his new digs, Hamtramck ‘16 takes a retrospective nod to the analog 80’s and Detroit dance music. However, aligning an EP so strongly to underground dance roots sets listeners up for disappointment. With the expectation of diverse sounds and synth-tastic apexes, instead, the tracks of the EP all start with catchy promise and end up dispirited and flat. Disco-oriented songs such as “Come Around” miss the beloved hallmarks of the era. The dazzling heights and elastic urgency of disco’s signature 4/4 dance beat is replaced by underwhelming, tinny hi-hats that drag their heels and hold back any potential for spectacle or excitement. Frustratingly, the lifeless beat is repeated on “Jasmine”, a soulful 4-minute pop number that shuffles to a groove tempo but plateaus quickly in energy and textural interest.

A high point on the album comes with single “In & Out”, a track that captures the dreamy synths interlaced with Benjamin’s lo-fi vocals and falling arpeggiating notes, hallmarks that made tracks like “Roswell” and “Secret Life” such incredible soundscapes off of Moon King’s previous release Secret Life. The gated techno beat of “In & Out” whips its way throughout the song to provide a nice anchor for the gazey layers. Dance fever is short lived however, with the ballad of the following track “Just a Minute”. Benjamin’s androgynous vocals here emulate the falsetto of the Bee Gees, but are poorly supported by a deadpan beat that sounds more like pressing the demo button of a Casio keyboard than a well thought out synthesized rhythm section. “Hit It” delivers a vocal break with a synth instrumental track that mimics the break beats of 80s house music, kind of cool but with potential left to go weirder, to delve into the electronic layers that Benjamin is capable of.

What’s genuinely impressive though, is Moon King’s guts to radically reinvent himself and evolve with his surroundings. To shift from the sways of Cocteau Twins-esque dream pop that made Moon King’s first two releases so well received, to Giorgio Moroder-style dance hall grooves is a huge stylistic undertaking and creative risk. While missing the mark this time on disco, Hamtramck ‘16 sets Moon King up as an interesting artist to listen out for.

Michelle La is a freelance writer based in Melbourne, Australia. She is the Editor of Cat Brain Land, a music blog that loves new and alternative music from Asia and Australia.
RELATED ARTICLES
album reviewsarbutus records
7.0