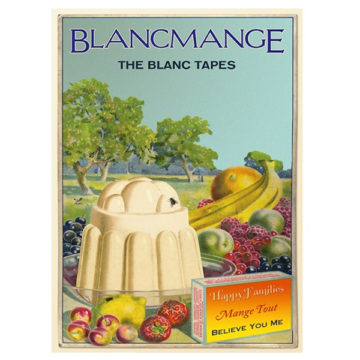 In 1981 I bought a sampler album called Some Bizzare Album.  There were a lot of incredible bands on the album, The The, Soft Cell and Depeche Mode.  But there was one song by a new band named Blancmange (and I loved that name) called “Sad Day” that I listened to repeatedly. I can’t put into words why, but it was clearly the highlight of the album and I wanted to hear more from this band.  I would have to wait another year for their debut album, Happy Families, but “Sad Day” has stayed with me for 36 years.

That version of the song is on the new box set, The Blanc Tapes, a fantastic collection of Blancmange. In fact everything Blancmange recorded for London records from 1981 to 1985 is found on this new box set.  But there is more, so much more — concerts, BBC sessions, and unreleased demos and songs.  Nine CDs of some of the best music recorded in the first half of the 1980s.

Blancmange were Neil Arthur and Stephen Luscombe, and they formed in 1979 with a third member, Laurence Stevens.  Stevens left a year later, and in 1980, Blancmange released their debut EP, Irene and Mavis (an incredibly rare EP, limited to 500 copies).  Oddly this EP is not found in this box set, which is a shame, as it is quite good and fans would appreciate an opportunity to hear those songs.

Blancmange signed to London Records in 1981 following the release of Some Bizzare Album, and their debut single “God’s Kitchen” was issued, foreshadowing the brilliant album Happy Families.  Happy Families and all the singles/remixes and outtakes are found on CDs one to three.  This album was a stunning debut album, and although they used synthesizers and were part of that electronic explosion of the early 1980s, Blancmange stood out.  Name one other album released that year that featured sitar and tabla (“Living On The Ceiling”). It was full of incredible songs full of catchy melodies and some of the saddest lyrics.  Not depressing, but sad.  And it included a new version of “Sad Day”, the song that introduced me to the band. The cover of the album, the cat family picnic, was just the icing on the cake.  Everything mattered with this album, the sleeve, the music, the lyrics.  One song included here, left off the album, “I Would”, would have fit perfectly on the album, and it is a shame it has taken this long to hear.  Fantastic song!

Two years later and the band returned with a new single “That’s Love, That It Is”.  A brilliant slice of synthpop, but again with twists and turns in the melody and Neil Arthur’s voice full of conviction.  An angry love song!  After a two year wait, fans (me included) were ready for new Blancmange.  Mange Tout, released in 1983, proved to be their most successful album and their first to feature a cover (ABBA’s “The Day Before You Came”, which Blancmange made their own).  This album was not a copy of their first, but more of a continuation of this ever growing band.  Here, CDs four to seven feature the complete album, B-sides, remixes, BBC sessions, outtakes and a live performance.  Three CDs of pure genius.

Waiting their customary two years, Blancmange resurfaced in 1985 with a single “What’s Your Problem”, a song that has stood the test of time and was an interesting choice for a single to represent a new album.  They were always challenging the fans, and I loved it.  Believe You Me was released, and sadly would prove to be the last Blancmange album of the 1980s (they returned in 2011 with the brilliant Blanc Burn, and Neil Arthur continues to issue music under the Blancmange name).  Believe You Me is my favourite Blancmange album and to my ears a perfect album.  “Lose Your Love”, “Paradise Is”, “Why Don’t They Leave Things Alone” are just three reasons why I love this album.  Arthur’s lyrics are brilliant, poignant and incredibly heartfelt.  Luscombe’s music, a mix of melancholy and pain is beyond words.  Here, this album fills up the last three CDs.  Again fans are treated to the whole album, B-sides, remixes, unreleased gems and a live concert.

Blancmange proved that a band could be experimental and still produce brilliant pop music.  The Blanc Tapes is a testament to a time (the early 1980s) but more importantly it charts the first chapter of this incredible band’s career.  Arthur would release a solo album (the brilliant Suitcase in 1994) and resurrect Blancmange in 2011 as well as forming the incredible band Fader with Benge.  Luscombe would go on to form West India Company (which Arthur was part of as well) and move into more production work (he was also part of the resurrection of Blancmange in 2011 but due to health reasons did not continue on with the band).

Neil Arthur and Stephen Luscombe were two of the most creative and innovative artists of 1980s.  Their influence was felt throughout the last three decades and yet they never got the recognition they deserved.  This box set should set that right.  Their first three albums have been reissued before, with bonus material, but this set is everything.  Each of the albums are available individually (with all their respective bonus material).

The Blanc Tapes is an example of a well thought out compilation.  It is also an artistic statement.  Blancmange were the innovators and continue to be so (just listen to the music Neil Arthur is issuing today).  This set proves that they were and are one of the most important bands in the last 30 years.

This is a brilliant reissue and the packaging is stunning.  From the box sleeve to the notes to all the information about the songs.  Perfect!

Born and raised in Whitby, Aaron discovered music through his love of The Beatles. This led to a career in radio, writing for various publications, and ultimately a radio show about The Beatles (Beatles Universe), which ran for over four years. When not immersed in music, Aaron enjoys spending time with the loves of his life -- his wife Andrea, and daughters Emily and Linda (all of whom have an intense love of music too).
RELATED ARTICLES
album reviewsblancmangeedsel recording
9.0