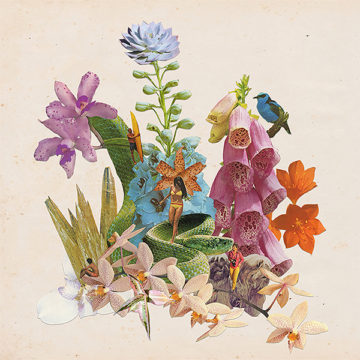 Cinematic and picture-esque are not usually the first words that come to mind when listening to music, but that seems the most fitting way to describe Mystery Cove, the fourth album from Monster Rally.

Dreamy and moody, the 20-track album is one continuous flow of beautifully crafted soundscapes. With Mystery Cove, Artist Ted Feighan, who is Monster Rally, attempted to create “a soundtrack to an imaginary movie” which involves an island romance, surf competitions, wild jungles, and the occult. Somehow, he captured the vision perfectly.

Beginning with the Zen-yet-somehow-edgy Washed Ashore, building to the album’s single, Pelicans – one of the only tracks on the album that features vocals – the record is a slow-burn journey of ups and downs, sun and storms – and not figuratively; there is really a thunderstorm during track 19, “Little Buddy.”

The album closes with the melancholy and appropriately titled Misty Sunset, and it’s not hard to picture to young, sun-kissed lovers walking down a beach, hand-in-hand, into the sunset…or something like that.

With smooth transitions between songs, it’s all too easy to get lost in this album. For a soundtrack with no real home, it truly is a beautiful piece of work – and a true escapist’s dream.

Jacqueline Tucci is a journalist in Toronto. She’s new to Spill, but has been interviewing bands and writing about music since she was a teenager. You can almost always find her on the web, in record stores, or in bars looking for new and exciting local music.
RELATED ARTICLES
album reviews
8.0