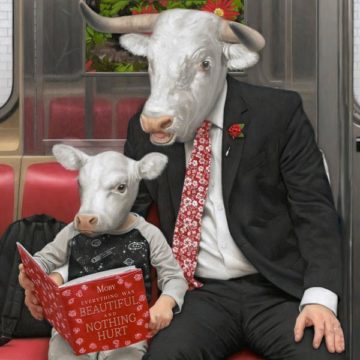 Moby
Everything Was Beautiful, And Nothing Hurt
Arts & Crafts

American electronic DJ/producer/singer-songwriter Moby’s latest album Everything Was Beautiful and Nothing Hurt isn’t anything like his fifth and breakthrough album Play in 2000, which boasted eight singles and sold over 10 million copies world-wide. The new album is a sombre and somewhat dark affair, even though it surely has its high points too.

On the new album, Moby explores spirituality, individuality and the brokenness of man in a post apocalyptic world.

The first single and video, “Like a Motherless Child,” features LA-based soulstress Raquel Rodriguez, and is a re-work of a well known spiritual song with its origins in the American South. Over the years this powerful song has been interpreted by the likes of Odetta, Lena Horne, Mahalia Jackson and Van Morrison.

The second single and video, “Mere Anarchy,” is described by Moby as “post apocalypse, people are gone, and my friend Julie and I are time travelling aliens visiting the empty earth.”

In my opinion, the best songs are placed towards the end of the album. Track number 9, “Falling Rain And Light,” with the chorus “And I need you,” is mesmerizing,  and this followed up by “The Middle Is Gone,” which, though depressing, is quite brilliant just the same.

A heavy album to listen to, perhaps, but worth doing so more than once.

Gerry Young is President of Current Records and Management, and author of the 2011 biography Pop Goes The Weasel: Rock And Roll Off The Record, available at Indigo/Chapters, Barnes & Noble, and Amazon.com. He has recorded and managed Juno Award winning bands Martha And The Muffins and The Parachute Club among others.
RELATED ARTICLES
album reviewsarts & craftseverything was beautiful and nothing hurt
8.0