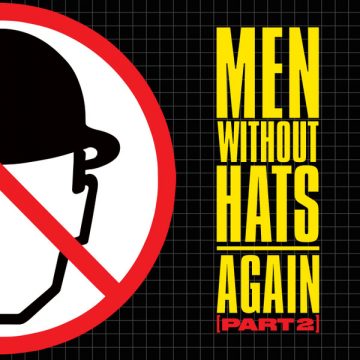 Last year, Men Without Hats resurfaced after a nine-year absence. Although they had toured, there had not been new music from them since 2012’s Love In The Age Of War. But in 2021, they released Again (Part 1), an EP of cover versions of songs by The Tragically Hip, The Rolling Stones and even a remake of “Safety Dance”. But Again (Part 2) is an album of brand-new originals

Men Without Hats show their ability to produce incredible instrumentals. “Theme From The Summer of ‘72” is incredibly moving, and precedes the lovely “When Does The Love Begin”. Again, the song is on the surface a love song, but Ivan is singing to the world at large.

Here, synthesizers are at the forefront, yet the album opens with a blistering guitar solo/instrumental “Intro”, and ends with much more mainstream, traditional instruments with “Where The Wild Goes”, which brings the album to a wonderful and thought-provoking end..

The Doroschuk brothers have always had a knack for catchy melodies and great lyrics. This album is no exception. It instantly burrows into your mind, keeps you engaged and wanting more. As with other Men Without Hats albums, the minute Again (Part 2) ends, I want to start it all over again. Again (Part 2) is a near perfect album f and one can only hope there is not another 10-year wait for the next album.

Born and raised in Whitby, Aaron discovered music through his love of The Beatles. This led to a career in radio, writing for various publications, and ultimately a radio show about The Beatles (Beatles Universe), which ran for over four years. When not immersed in music, Aaron enjoys spending time with the loves of his life -- his wife Andrea, and daughters Emily and Linda (all of whom have an intense love of music too).
RELATED ARTICLES
again (part 2)album reviewalbum reviews

by Aaron Badgley on November 22, 2021
AGAIN AND AGAIN AND AGAIN A CONVERSATION WITH IVAN DOROSCHUK OF MEN WITHOUT HATS It has been almost a decade since the last Men Without [...]