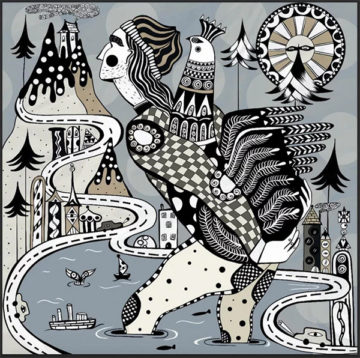 For long time Matt Mays fans it has been one hell of a long wait for new music. Five years and one month to be exact since 2012’s Coyote. Finally Matt Mays is back with his seminal new album Once Upon a Hell of a Time. According to Mays the new album is a representation of the journey he’s been on over the past decade. A perfect bookend to a wild half decade of deep personal change.

Welcome back Mr. Mays, you have been greatly missed.

In simplest terms Once Upon a Hell of a Time is a great rock and roll record. While so many of his colleagues have begun to add more pop influences to their work, Mays has immersed himself in the classic rock stars of yesteryear.  Tracks like “NYC Girls” and “Faint of Heart” are begging to be played in front of thousands of adoring fans.

Mays isn’t afraid to dive deep into his own psyche and confront his past head on. Clearly the last few years have taken a toll on the singer. “Sentimental Sins” confronts the loneliness so many have felt as a relationship falls apart. By diving deep into his own insecurities and failings Mays is able to present a record that is more human, more relatable, the kind of music that wears it’s heart on sleeve.

Once Upon a Time in Hell isn’t the album you play right after you’ve been dumped. It’s the triumphant soundtrack to getting back out there. It is a tribute to anyone who’s traveled to the very gates of Hell and has come back stronger and better for it.

Would it be lazy writing to say Once Upon Hell of a Time is a Hell of a good time? Probably. But that doesn’t make it any less true.

Here's what we think...
Spill Rating
Fan Rating
Rate Here
New Criteria
10
88.8
8.0
Total Spill Rating
88.8
Total Fan Rating
6 ratings
You have rated this
Album Reviews
album reviewsfaint of heartmatt maysonce upon a hell of a timewarner music
album reviews, faint of heart, matt mays, once upon a hell of a time, warner music
About the Author
Morgan Harris

Photographer by choice, writer by necessity. Since moving to Toronto in 2011 Morgan has become an active member of Toronto’s music scene. On any given night he can be found at various venues with his camera in hand. There’s nothing he loves more than exploring all the venues this wonderful city has to offer, discovering new bands and genres along the way.
RELATED ARTICLES
album reviewsfaint of heartmatt mays
8.0