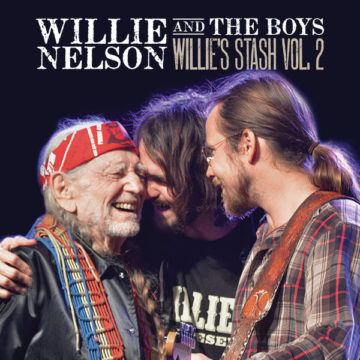 On Friday, October 20, 2017 Willie Nelson fans will finally be able to get their hands on Willie Nelson and the Boys (Willie’s Stash, Vol. 2). This release follows December Day (2014), the first volume in the Willie’s Stash series and features Nelson’s sons, Lukas (vocals, electric guitar, resonator guitar and singer/songwriter/guitarist of Lukas Nelson & Promise of the Real), who has toured with his father since he was 13 years old, and Micah Nelson (vocals and singer/songwriter/guitarist in future-folk project Particle Kid). Both sons have inherited their father’s affectionate, heart-warming twang, as heard throughout the album’s eleven classics and Willie Nelson’s new song, “Healing Hands Of Time,” one of my personal favourites.

The Willie’s Stash series is a coveted collection of archival releases from Willie Nelson’s decades-long recording and touring career. Plus Nelson himself personally curates the series. Willie Nelson and the Boys (Willie’s Stash, Vol. 2), Nelson’s 10th album with the label, consists primarily of studio recordings from Heroes (2011), Nelson’s debut on the label, which also has numerous duets with his son, Lukas. This album was produced by Nelson’s longtime friend and collaborator, Grammy-winning Buddy Cannon, and recorded by Steve Chadie at Pedernales Recording Studio, in Austin, Texas.

“I really love the live element of this record,” Cannon says. “There was a fire in the studio during those sessions, especially on these particular tracks. It was as though the band was in a Nashville honky-tonk and Willie and Lukas strolled in and jammed with the band for an hour. That’s what this record is. It’s honest excitement. I’ve never cut a record before that has this element. It’s a great joy to see Willie, Luke and Micah all equally part of a record that I love so much.”

The album plays like an old friend, with familiar slide guitar and Mickey Raphael’s clever harmonica licks. A rounded lilt encompasses the album that flows around the quicker-paced “Move It On Over” and “Movin’ On.” Alyssa Miller’s “My Tears Fall,” the only female songwriter featured in the “Hanked” out collection (with Barry Bales on upright bass and Lonnie Wilson on drums), and Hank Williams Sr.’s “I’m So Lonesome I Could Cry” break the country shuffle.

The majority of the Willie Nelson and the Boys (Willie’s Stash, Vol. 2) pays homage to seven Hank Williams Sr. hits, including “Your Cheatin’ Heart” and “Cold, Cold Heart.” After “Cold, Cold Heart” listeners can hear Nelson fans whoop and holler in the background to which he warmly greets his audience, “How y’all doin’?” The album closes with lovely renditions of “Mansion On A Hill” and the upbeat and sweet “Why Don’t You Love Me.”

According to Nelson, the album is “….kinda like the country version of Stardust. Where you have all these great songs and standards that the young people have never heard, then all of a sudden you have a whole new audience out there.”

Talia Wooldridge is an avid music lover, composer and ethnomusicologist who contributes artist interviews, live concerts, festivals and album reviews for Spill Magazine. She has written extensively on the intersection of music, personal identity and cultural symbolism with an early focus on Latin American Hip Hop and female Cuban rappers. In her spare time, Talia writes, composes music and manages Music Can Heal, a non-profit that brings live, award-winning musicians to inspire healing in hospitals, hospices and communities in need. Her next project is an interactive music-travelogue exploring music cultures and music travel around the globe. Follow her here: www.taliawooldridge.com + www.movetoyourownbeat.com.
RELATED ARTICLES
album reviewslegacy recordingswillie nelson
9.0