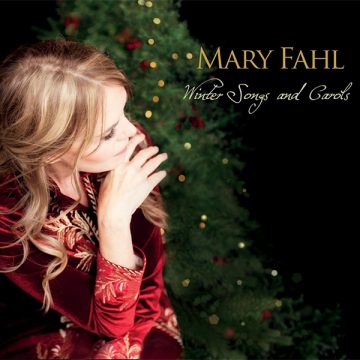 Winter Songs And Carols is Mary Fahl’s fourth studio album since leaving October Project in 1996, and on the surface looks and sounds like a Christmas album,  but it is more, much more.

As well as being an extremely talented songwriter, Fahl is also highly skilled at interpreting others’ songs. On this album, she tackles traditional carols, and she does them extremely well. She book ends the album with the traditional “Wexford Carol” and ends the album with a stunning “O Holy Night/Silent Night”.  The acapella “Silent Night” is simply breathtaking. It is also the most  beautiful way to end the album. But in between, there are cover versions of some great songs by great artists. For example, her take on Sandy Denny’s “No End” rivals thtes original.

What Fahl and her crew have done is create more of an atmosphere than a concrete theme. The album feels like winter. This is due in part to her outstanding vocals, alongside some very clever arrangement and production. Producer Mark Doyle, who has worked with and produced Fahr in the past, knows how to arrange the music to highlight the emotion and meaning of each song. He also provides keyboards, guitars, bass and drum programming.

Fahl incorporates folk such as on Leonard Cohen’s “Winter Lady”), celtic, classical, and a tinge of alternative. Listen to her version of “Walking In The Air” and “Ave Maria”. This all adds up to  a well-recorded, well-produced winter album. Winter Songs And Carols is the album you want on while the snow falls outside, and you are warm in your home. It is a wonderful collection and a welcome addition to your seasonal record collection.

Born and raised in Whitby, Aaron discovered music through his love of The Beatles. This led to a career in radio, writing for various publications, and ultimately a radio show about The Beatles (Beatles Universe), which ran for over four years. When not immersed in music, Aaron enjoys spending time with the loves of his life -- his wife Andrea, and daughters Emily and Linda (all of whom have an intense love of music too).
RELATED ARTICLES
album reviewalbum reviewsmary fahl
7.0