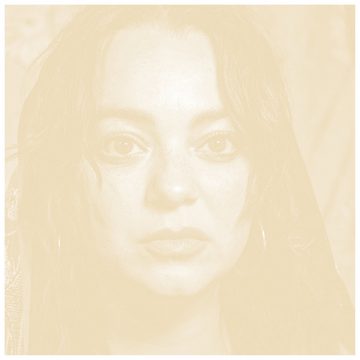 Chris Schlarb, who produced, mixed and plays guitar on Eros, describes Maria Elena Silva’s debut album for his Big Ego Records label as “a delicate art-pop record with an improvisational-jazz undercurrent”.  Although that sums up this album beautifully, I would add that this is a quiet, emotional and stunning avant-garde pop/jazz album. It reminds me of David Sylvian’s classic Gone To Earth or Mark Hollis’s solo album. Silva combines the beauty of these genres while bringing in her own distinct style.

What is immediately noticeable is the volume of the album. It is quiet. Schlarb and Silva allow space into each song to allow each note, each beat, to breathe and have its own life. It is truly a remarkable feat. It also sounds distant. This is not a criticism, it is all due to space. It is almost unearthly but at other times, one almost feels like they are eavesdropping on a person’s very personal thoughts.

Part of the reason is Silva’s incredible voice. She draws the listener in then tells her story. A story of lost love. The sadness and emotion pours through each word of each song. She does not have a conventional style, but rather, she creates her own vocal method and it is extremely effective. Her voice becomes another instrument in the songs. Although she has an incredible voice, she is not afraid to let the music tell the story in heartbreaking instrumentals, such as “Ribbons” and “Thickets”. They bridge songs, but the instrumentals do more than that, they are a time for reflection.

Silva composed the entire album. Lyrically and musically she utilizes sparseness, which works. “Boy” is a good example of this. She says a great deal in very few words. She does include one cover. I don’t think Hoagy Carmichael ever envisioned his classic “I Get Along Without You Very Well” as Silva performs it, but I think he would approve. She captures the bluesy feeling, with the incredible layered sounds and very subtle horn arrangement. It is effective and brings out the absolute sadness within the song.

The emotion, feeling, and bravery in this work is, quite simply, unlike anything you may hear this year. Silva has created a deeply personal album. This is not self-indulgence, but rather pure expression. It is, in a word, genius.

Born and raised in Whitby, Aaron discovered music through his love of The Beatles. This led to a career in radio, writing for various publications, and ultimately a radio show about The Beatles (Beatles Universe), which ran for over four years. When not immersed in music, Aaron enjoys spending time with the loves of his life -- his wife Andrea, and daughters Emily and Linda (all of whom have an intense love of music too).
RELATED ARTICLES
album reviewalbum reviewsbig ego records
8.0