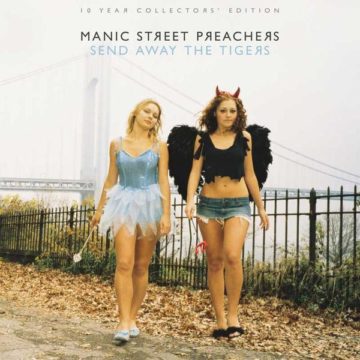 It is hard to believe that Send Away The Tigers is now ten years old.  This album, the eighth in their catalog, was seen as their return to form.  And it was extremely well received.  The only thing keeping it out of number one in the UK. was The Arctic Monkeys album Favourite Worst Nightmare by a margin of 600 copies.  But over time, this album has gained new fans and is regarded as a classic album.  And it deserves all the recognition it receives.

To celebrate its tenth anniversary (it was released May 7, 2007), the group has added a great deal to the album, remastered the original and added a DVD of their 2007 Glastonbury show.  Fans will love this.  But for the average fan, the ones who appreciated the original album as it was, the extra material may be a bit ponderous getting through.  But stick with it, it is well worth the effort.

The title, Send Away The Tigers, comes from an old British comedian Tony Hancock,  who used the term to describe “battling one’s inner demons by getting drunk”.  By this point in their career, this Welsh band had more than enough issues to warrant them a great deal of internal and external demons.  This came out throughout the album in the lyrics, and besides the solid music they produce, their lyrics have always been a high point.

Reissues are a funny thing.  When adding material and remastering albums there needs to be a delicate balance between maintaining everything that everybody loved about the album, while adding new material and bringing the older album up to date to warrant a ‘reissue’.  It is fascinating to think that in ten years music technology has changed to the point that this album needed to be remastered.  Quite frankly it didn’t and to my ears, James Dean Bradfield  (guitarist and vocalist for the band) did little in terms of altering the sound.  If anything he cleaned the sound a little and balanced the instruments and voices. The guitar still sounds crisp and that was one of the main selling points for the album.   Send Away The Tigers always sounded good to me, so there was little improvement with core material.

The bonus material, demos, B-sides, and bonus material from the Japanese special issue of the CD are a welcome addition, especially their incredible cover of “Umbrella”.  But the interesting material are the demos.  Although Manic Street Preachers have always had interesting B sides (“Ghost of Christmas” to name one), and their cover versions are always worth a listen (their version of Lennon’s “Working Class Hero” is an interesting take on the classic track), it is the demos in acoustic and early form that really centre the bonus material.   The listener can hear how the songs evolved to the classics they became.  It is a testament to the songs that, for the most part, the songs in demo form are equals, to the final released versions.  In some cases the demos are little better (“Underdogs” comes to mind).

The Dvd features their 2007 Glastonbury performance as well as promo videos and behind the scenes takes.  Fans will love the addition of the DVD material.

Overall, a brilliant reissue.  It is obvious a great deal of care was taken into putting this together.  It is a wonderful reminder of how great the album is and how well Send Away The Tigers has aged. It was a strong album when it was released ten years ago, and it is a strong album in 2017.

Born and raised in Whitby, Aaron discovered music through his love of The Beatles. This led to a career in radio, writing for various publications, and ultimately a radio show about The Beatles (Beatles Universe), which ran for over four years. When not immersed in music, Aaron enjoys spending time with the loves of his life -- his wife Andrea, and daughters Emily and Linda (all of whom have an intense love of music too).
RELATED ARTICLES
album reviewsmanic street preacherssony music
8.0