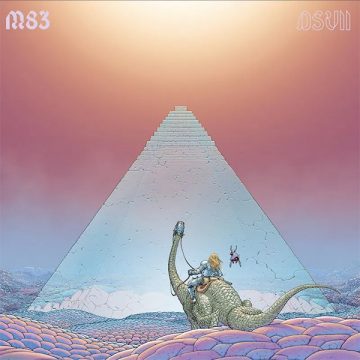 M83 brings us its newest and much-anticipated release, the instrumental DSVII (Digital Shades, Vol. 2). Its follow-up to 2007’s Digital Shades, Vol. 1 is decidedly richer and fuller in sound and substance, giving evidence of frontman Anthony Gonzalez’s growth as an artist and as a person.

The 15 tracks are a journey through the mind of Gonzalez in a way that follows no predetermined corporate musical template. The ‘80s influence of Gonzalez’s childhood is clearly evident and powerful. One can’t hear the excellent 10th track, “A Taste of the Dusk,” without evoking memories of 1984’s The Never Ending Story. The film was in fact one of the inspirations for the album, along with early video game soundtracks, ‘80s sci-fi/fantasy films, and analog synth pioneers such as Brian Eno, John Carpenter, and others.

Any fan of M83’s last two studio albums, Junk (2016) and Hurry Up, We’re Dreaming (2011), will find the tone to be of a noticeably down-tempo, meditative affair. It’s a more mature and focused offering from Gonzalez after spending time recovering from mental and physical exhaustion following a successful tour. Additionally, he was dealing with unsatisfactory feelings from the reception of Junk, and a year of creating music for the Cirque du Soleil show Volta.

Additional standouts on the nearly hour-long album include tracks “Hell Riders,” “A Bit of Sweetness,” “A Word of Wisdom,” “Lune De Fiel,” and the album’s first-released single “Temple of Sorrow.”

The expansive, atmospheric soundtrack of DSVII surges into the soul in a manner which is familiar to the M83 fandom. The flutes, drums, piano, synthesizers, angelic vocals, and electric, acoustic, and Spanish guitar all make DSVII a brooding delight to the senses.

Imagine an alternate universe while consumed with childhood fantasy reverie: vintage video game sounds, ’80s cinema, and sitting atop Falkor as you travel through the spaces in your mind. That is M83’s DSVII, in a nutshell, and it’s outstanding.

John Graham is a Vancouver-area resident who typically spends most days admiring music of all genres. When not listening to music, John is usually at a live show, somewhere in the bowels of Vancouver.
RELATED ARTICLES
album reviewalbum reviewsanthony gonzalez
8.0