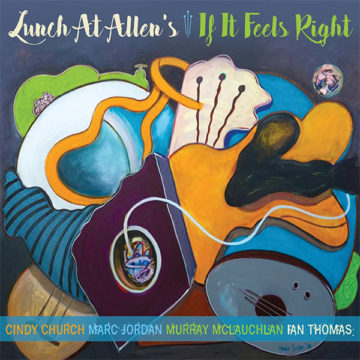 Lunch at Allen’s is Murray McLauchlan, Ian Thomas, Marc Jordan and Cindy Church.  All Canadian superstars in their own right.  If It Feels Right is the fifth release from this quartet.  Their last album, ZuZu’s Petals: A Lunch At Allen’s Christmas was five long years ago.  But when you are dealing with artists of this caliber, when they get back together, those five years seem to disappear and they pick up from their last release.

If It Feels Right is a very consistent, strong album.  The songs all flow together and the band support each other throughout.  Folk rock, easy listening, easy rock, whatever you want to call it, the album is what you expect from this group.

This is not a bad thing, or a criticism.  What they do, they do well.  The addition of Cindy Church with the other male voices give the songs that extra something that elevates the songs and makes them very interesting. All four of them contribute, interestingly, McLauchlan’s  contributions are new versions of some of his old favourites. “If The Wind Could Blow My Troubles Away” (originally released in 1981 on the album Storm Warning) benefits from the Lunch At Allen’s treatment, making the song nostalgic yet contemporary, a remarkable feat.

But it is the newer songs that elevate the album. Jordan, Thomas and Church all deliver remarkable songs, that deal with current situations (Jordan’s “Nothing Comes From Nothing””), to songs about the human condition (Thomas’s “Stash Some Time Away” and Church’s “Sweet Agony”) and everything in between.

This self produced album is well arranged and sounds great.  The album has the sound of the perfect summer patio album or the soundtrack for a road trip.  And as good as it sounds, it is doubtful if If It Feels Right is going to win over new fans.  The followers of the group will enjoy the album and it will not disappoint.

Born and raised in Whitby, Aaron discovered music through his love of The Beatles. This led to a career in radio, writing for various publications, and ultimately a radio show about The Beatles (Beatles Universe), which ran for over four years. When not immersed in music, Aaron enjoys spending time with the loves of his life -- his wife Andrea, and daughters Emily and Linda (all of whom have an intense love of music too).
RELATED ARTICLES
album reviewscindy churchian thomas
9.0