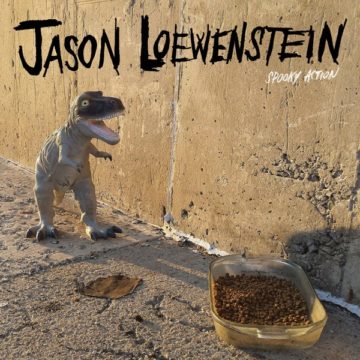 Spooky Action is not a major departure from either of those bands, but it is clearly a solo album. I am not so sure that either band could have done any of these songs justice, and they all fit nicely on this package. It is hard to pigeonhole the album. It is not punk, or grunge, or metal, but rather a mixture of all of the above with a smattering of rock thrown in for good measure.

Loewenstein does it all on this album. He wrote all the songs, plays all the instruments, produced and engineered the whole project.  And he deserves a great deal of credit. The album is extremely well recorded and well produced.  Loewenstein is a very talented musician as well. He performs the songs expertly and his voice is in fine form. Perhaps some of the best vocals he has ever delivered. The album is a treat to the ears.

I am probably reading too much into this album, but to my ears it fits together as a concept album. The opening track, “Intro” is the conclusion of a concert, with Loewenstein thanking the audience to the crowd’s approval.  He leaves the stage and goes back to his life. The album is like a behind the scenes look at an artist facing the struggles of day to day life. ‘I thought we came to an agreement, meeting all the conditions’ he sings in “Machinery”.  He could be talking about a relationship but it sounds more like meeting contractual obligations. Further on in the album, he sings, ‘I have no idea what’s true’ he sings in “Superstitious”.  Clearly, Loewenstein is saying something on this album about life and the, human existence.

That is what sets this album apart from other albums in the genre. Whatever genre you want to slot the album in, that is. The lyrics are very strong and the songs, although loud, are remarkably melodic.  Listen to “Hey Hey” (not to be confused with the Paul McCartney song of the same name), and after one listen, it lodges firmly in the brain and hours later you find yourself humming the song.

And as far as the sleeve, it is one of the finest of the year. Is he the dinosaur on the front cover? I don’t think so, he has been around a while but judging from this album, he is to musically innovative, not afraid to take risks and he is more relevant now than ever before.

An extremely strong album.  And a perfect album for the summer.  Fans should enjoy and people who may not be familiar with his music give it a chance, he may have a whole new fanbase.   One small request, let us not have to wait another 15 years until the next solo album.

Born and raised in Whitby, Aaron discovered music through his love of The Beatles. This led to a career in radio, writing for various publications, and ultimately a radio show about The Beatles (Beatles Universe), which ran for over four years. When not immersed in music, Aaron enjoys spending time with the loves of his life -- his wife Andrea, and daughters Emily and Linda (all of whom have an intense love of music too).
RELATED ARTICLES
album reviewsjason loewensteinjoyful noise recordings
10