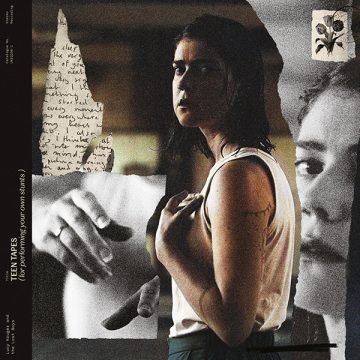 Teen Tapes (For Performing Your Own Stunts) is the third album in a trilogy released by Lucy Kruger & The Lost Boys. It began with 2020’s “Sleeping Tapes For Some Girls”, continued with 2021’s  Transit Tapes (For Women Who Move Furniture Around). The series documents Kruger’s first year and a half since she moved to Berlin. She is accompanied by Liú Mottes, Andreas Miranda and Martin Perret, who also appeared on Transit Tapes.

The music is minimalistic psychedelic mixed with lo-fi and folk music. It is quite a combination, and the end result is very trippy, yet dark music. Kruger delivers her vocals in a very breathy manner and this adds to the overall effect of the music. It would seem that the transition to Berlin was not a smooth one for Kruger, but at the same time was an educational one, although they end on a hopeful and positive note with “Unpack”. Here she is  expressing her love to another, what isn’t clear is how the other is responding to Kruger.

Lyrically and musically it is very interesting. The slow, sparse arrangements and vocals all mix together very effectively. Kruger takes her time with each song and as result she is able to draw the listener into the entire album. And it does work better as an album, as opposed to a collection of tracks strewn together.

As good and consistent as the album is, there is also a need for some diversity throughout it. To my ears, this was the only downfall of the entire project. There is a sameness throughout and some jolting moments would be very welcome. This are minor moments, such as “Play” and “Escape”, which shift gears, but those moments are few and far between. More such moments would have been welcome.

Overall, like her previous work, this is a brave and honest attempt at using music and lyrics as a confessional and memoir. It is an interesting album, and one that can be enjoyed by repeatedly listening to the lyrics. In fact, the more I listened, the more I found myself engaged in her stories. Fans will definitely love this, and she just may win herself a few new ones.

Born and raised in Whitby, Aaron discovered music through his love of The Beatles. This led to a career in radio, writing for various publications, and ultimately a radio show about The Beatles (Beatles Universe), which ran for over four years. When not immersed in music, Aaron enjoys spending time with the loves of his life -- his wife Andrea, and daughters Emily and Linda (all of whom have an intense love of music too).
RELATED ARTICLES
album reviewalbum reviewsamsterdam
9.0