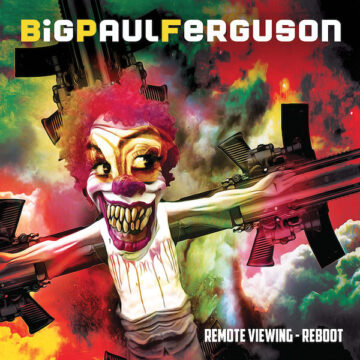 On a surface level, Remote Viewing – Reboot sounds like what you’d expect to hear if the drummer from English post-punk/industrial metal band Killing Joke made an album. If you know anything about “Big Paul” Ferguson, you know the drumming will be rhythmically complex without drawing attention to the fact and characteristically sparing in the use of snares and cymbals. You know it will be impeccably recorded and produced to provide space for all other sonic elements to combine into some unexpected, exquisite noise.

Where Big Paul’s work diverges from Killing Joke’s aesthetic is in his spoken-word vocals and the songs’ foundational genesis. Most evolve from layered, rhythmic loops serving as frameworks for Big Paul’s acerbic social commentary, delivered sing-speak, like a less-gravelly Tricky who enunciates. On “Hungry Ghosts,” Big Paul lyrically slips in and out of the present tense, the EQ compresses like he’s passing through a tunnel, and then he’s describing the same details from memory. “Reboot” unfolds with a 4/4 disco-tech scaffold gradually built up with electronic embellishments, chugging guitar, and Big Paul’s poetry.

On “The Great Motivator” Big Paul enumerates the beatitudes of Fear in a conversational deadpan against a surge of pounding toms and ebbing guitar swells before ultimately pronouncing, “Fear does not exist.” Were it not for the groove set by the tribal thunder of drums, it might pass for a much noisier, less arty Art of Noise. The album could use a touch of their humor—some cracks in the watertight seriousness—whether through satire, caricature, or a willful lapse in studio precision.

Remote Viewing – Reboot is the wide release of Big Paul’s 2018 debut EP augmented with a new track and six remixes. While we didn’t need two remixes each for “I Am War” and “The Great Motivator,” both versions of the former are handled by Killing Joke bassist Martin Glover aka Youth, who drenches each in dub and adds his own groovy bass runs. The new “Will to Survive” points the way to his 2021 full-length, Virtual Control, in which he sings the vocals and features more prominent guitar work from Mark Gemini Thwaite/MGT (Peter Murphy, The Mission), whose collaboration as co-writer, co-producer, and mixer is indispensable. It sits up nicely against “Zarzal,” a stately electro-dub lament sung by Ferguson, an oasis of regenerative sound in which to survive the earth’s demise.

Charles T. Stokes is a nonprofit resource development coordinator and donor researcher based in Denver, USA. He’s also a tennis player and writer looking to make a racket with his own noises. “There are places in the world where one cannot publicly listen to or perform whatever music they choose without fear of harassment or prosecution. The freedom to write about new music is power, a privilege.”
RELATED ARTICLES
album reviewalbum reviewscleopatra records
9.0