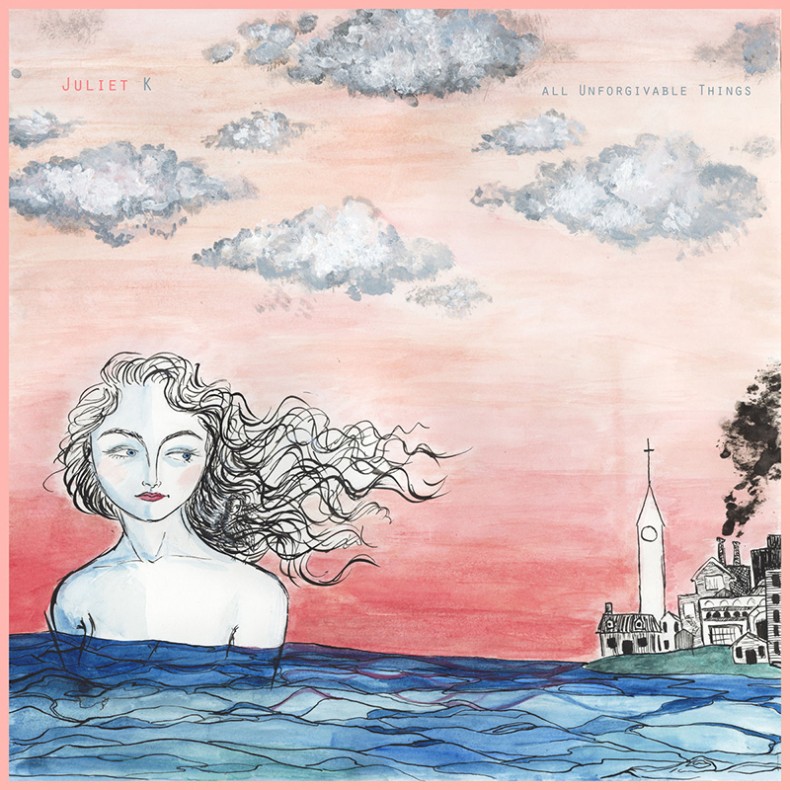 “All Unforgivable Things is ultimately two years of my life. These songs come from a transitional time and a place in myself almost before conscious thought. They were never intended to be “sad” songs, but a lot of them have ended up being about alienation, about trying and failing to communicate something vital, and about the weirdness of being in a mortal body on a dirty, growing, volatile Earth. And while so much of the content is about isolation in some way or another, this album is truly a product of collaboration—the group of extremely talented musicians and engineers that worked on this record with me undoubtedly made it richer and more nuanced. Like most musicians I hope people will find enough pleasure and meaning in these song to want to live with them, to listen to them on the train, to find comfort or understanding in them in some way.” ~ Juliet K

22 year-old-Brooklyn based alt-folk musician Juliet K is preparing to release her debut album All Unforgivable Things on March 11th, 2016. Juliet comes to Brooklyn via the Hudson Valley and Skidmore College, where she met collaborating guitarist Oliver Myles Mashburn of NYC rock band Swanky Tiger. Influenced by years of classical vocal training, her music is centered around warm, sensitive vocal performances and lyricisms, intertwined with complex melodies and unusual song structures founded in the avant-garde and experimental folk she takes inspiration from.

Released in August, the first single “Live With Me,” is an organic folk-rock anthem, representing the edgier, electric side of a record that is heartfelt, lyrically-driven, intimate, and at times ethereal. Though the single has a traditional rock band instrumentation, much of the album is textured with strings, intricate ukulele, acoustic and electric guitar, and synths that range from mellow to bright and rhythmic.

The upcoming All Unforgivable Things was produced by Donald Ducote ofAncient Historyand engineered by Kevin Blackler and Paul Johnson (mixing engineer of Beirut’s Lon Gisland EP). It heavily features Oliver Myles Mashburn ofSwanky Tiger on the guitar, with percussion and backing vocals by James Mulhern of What Laura Says. It also features cello by Catherine Wolk of Verdigrls and Nathan Kamal of Stratus Quartet on the violin. It was mixed and mastered by Johnny Kenepaske.

Juliet has been performing songs from this album at New York venues such as Pete’s Candy Store, Sidewalk Cafe, and Palisades, as well as collaborating with other local bands on house shows and private events.