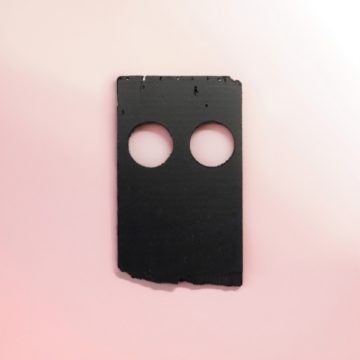 This year Low is reaching the Silver Wedding Wall celebrating 25 years together with an album full of noise and heavenly harmonies in a powerful mix. Double Negative is the band’s 12th studio album and no one can accuse them of leaning back on business-as-usual thinking or some kind of mental laziness. This is Low’s most experimental album since their debut I Could Live in Hope, which was quite experimental in its own rights, with its shaved down minimalism; the simple guitar and basslines from Alan Sparhawk and John Nichols (who is replaced now by Steve Garrington) and Mimi Parker playing a single floor tam and a single cymbal with brushes. Even the titles of the eleven tracks on that album indicate minimalism, consisting of only one word each.

On “Double Negative” it’s the noise that adds something new to the Low formula, a formula that still lies underneath, behind and along all the noise, taking up a fight where sometimes the noise, sometimes the heavenly harmonies win.

The album opens with the monstrous “Quorum” in a wall of noise. From behind the wall, voices and electronic soundscapes peep out in odd phased waves, rolling up and down. It’s hard to hear the words until suddenly, in a contrariwise surprise attack, the noise disappears leaving only the angelic chorus, then a short breath of silence, before noise breaks out again, more dramatic and angrier than before. “Dancing and Blood” follows just as weird and noisy before the glorious “Fly” lifts us way up above Earth: “Take my weary bones/And fly” Parker sings with her soulful vocal.

Producer B.J. Burton (James Blake, Sylvan Esso, The Tallest Man on Earth), who did Ones and Sixes with Low, is even more deeply engaged this time, in a process where everything has been cut up, put together again, over and over, until everybody was satisfied. He might have been the one making the band believe in noise as a redeeming force, and the alternation between the noise and the divine vocal harmonies are brilliant. Double Negative is a demanding album, but if one let it get into the veins it will pay off.

From a Scandinavian record player in the middle of Copenhagen Jens Trapp brings you some new Scandinavian stuff. His favorite albums include:David Bowie: Honky Dory and Ziggy Stardust plus everything until Let's Dance The Clash: London Calling Elvis Costello: This Year's Model Genesis: The Lamb Lies Down on Broadway Pink Floyd: especially Wish You Were Here If I should name one, but most of it will do ;-)
RELATED ARTICLES
album reviewalbum reviewsfly
9.0