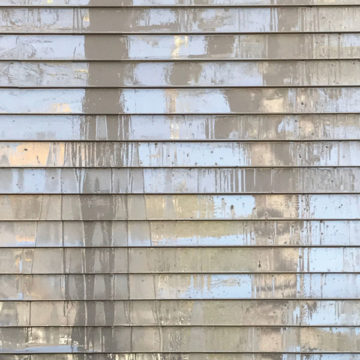 Sometimes you put an album on and have no expectations. And sometimes those albums can blow you away.  In this case, Fred Thomas has created an album that caught me by surprise. I did not know what to expect, so when I put Aftering on I let it win me over. It not only won me over, but what I heard was one of the best albums of the year. It literally burst through the speakers, grabbed me and did not let me go for about 47 minutes.

Thomas has been making albums for a very long time, both as a solo artist and as a member of Saturday Looks Good To Me (among other bands). Aftering is his eleventh album, and is connected to his last two, Are All Saved (2015) and Charger (2017). Aftering is the conclusion of this incredible  trilogy and it stands out its own as well.

Aftering is a very painfully honest album. Thomas does not pull any punches. He treats this album as his own personal therapy. According to Thomas, he based the album, very loosely, on Neil Young’s On The Beach, but to my ears this is more  Why? and Paul Westerberg. Thomas produced the album with Drew Vandenberg engineering. The two of them create the perfect sound, the perfect mix of acoustic, space and noise.

The songs are melodic, some short bursts of energy that last around three minutes (“Good Times Are Gone Again” as an example of a near perfect song), while others are an epic eight minutes. Thomas lets the songs dictate their length and he takes his time in playing them. Some of the songs seem like simple rock songs, but in reality, there is nothing simple about any of those songs, they are all complicated, musically and lyrically. Anxiety takes centre stage throughout the album.

Lyrically this is reality. Maybe Thomas’s reality, but his reality is our reality. Listen to “Mother Daughter Pharaprix” where Thomas witnesses an argument between a teen and her mother. His observations are accurate and bang on and he is able to, once again, touch on the anxiety that kills all of us “Her mother loves her so much that she is constantly terrified,” Thomas sings. The song  continues “that she can’t say, what is everywhere/It is a shivering plea…in each of them”.

“House Show Late December” is a brilliant study in self doubt and anxiety. After a lengthy and well put together sound collage intro, Thomas comes in with his guitar. He  talks to the listener as a guitar strums gently with a drum beat that crashes into the intimacy between the listener and Thomas. The effect is startling and jarring and it works. His anxiety becomes the listeners anxiety.

It is a tough album to categorize. It is not really folk, but there are elements present. It is more than alternative rock. Therein lies the beauty of this work, it is his own distinct sound, his own style. And we, the listeners, benefit from it.

Born and raised in Whitby, Aaron discovered music through his love of The Beatles. This led to a career in radio, writing for various publications, and ultimately a radio show about The Beatles (Beatles Universe), which ran for over four years. When not immersed in music, Aaron enjoys spending time with the loves of his life -- his wife Andrea, and daughters Emily and Linda (all of whom have an intense love of music too).
RELATED ARTICLES
album reviewalbum reviewsfred thomas
7.0