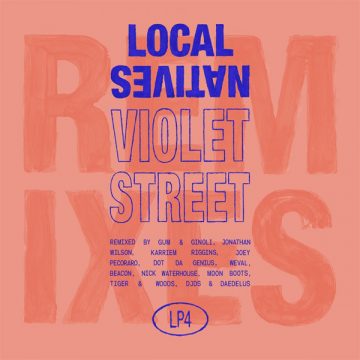 Listening to Local Natives’ holy trinity of vocals, Hahn, Rice, and Ayer, will soothe the soul of any listener. It’s been a decade and counting since the band completed and released their first album, 2010’s Gorilla Manor. Since then, the band has swayed many audiences, and are now taking a step back to allow other artists to take their turn at playing “Operation” to strip down, pull apart, or add on to the album with their own interpretation of last year’s Violet Street.

The likes of GUM and Ginoli present their first official collaboration, aside from their SoundCloud releases with Violet Street Remixes’ album opener “Vogue”. The Australian duo whose musical roots include Tame Impala, POND, and DJ James Ireland, aka Ginoli. The remix includes engaging melodies, and a downright awesome percussion addition that slowly builds from drums to what GUM and Ginoli are loved for, synthesizers.

Jonathon Wilson, multi-instrumentalist and producer of the likes of Laura Marling and Father John Misty, creates his own interpretation of the song “Café Amarillo”. The ambiance throughout the remix is immersive and pure, but not distilled to the point where Local Natives fans are not lost in Wilson’s style.

At 17, Karriem Riggins was playing with jazz beloved Betty Carter, and now he’s taking his own twist on Local Natives’ “Munich II”. Riggins takes the   already non-lyrical vocals, and draws out soothing emotions in the subtlest beats and vocal loops, while sprinkling bright spurts of synthesizers.

Next comes the craziest take on Violet Street, Weval’s “Megaton Mile” remix.  In the past they collaborated through film, but now are mainly known for their juxtaposed intensities and wild synth clasps. Weval’s remix for “Megaton Mile” will take your ears on a digitally stimulating ride, filled with a level of instrumental delay and reverb that you never knew you wanted to exist in your ears.

Of course one cannot skip the second out of three remixes for “When Am I Gonna Lose You”, created by the spunky R&B, and vintage pop-inspired artist Nick Waterhouse. In 2017 Waterhouse also remixed “The Gold” for Atlanta’s very own Manchester Orchestra. When listening to both remixes, listeners will understand Waterhouses’ unique taste in rhythm and blues. From the get-go of the remix Waterhouse decides to incorporate an up-tempo, good-time pop soul take to the song, which simmers towards the end with simple percussion beats.

Overall, Violet Street Remixes is a great mix of artists of all genres coming together to appreciate the sweet origins of 2019’s Violet Street. Some remixes completely change the style of the original, and have it turned upside down into a different genre, and some with simple alterations. Regardless, Violet Street Remixes did not disappoint and you should definitely check it out.

Freda Looker has been a music enthusiast since her mother first got her dabbing at a young age to Engelbert Humperdinck, The Beatles, and ABBA. Her passion still lives on today, avidly attending music festivals, blogging, and studying Music Business. She hopes to continue writing and engaging with like-minded music enthusiasts wherever the rhythms and beats lead her.
RELATED ARTICLES
album reviewalbum reviewslocal natives
8.0